Among CODART members the Museum De Lakenhal in Leiden is probably best known for its Old Masters, which include works by Lucas van Leyden, the young Rembrandt and the Leiden ‘fine painters’. Successful shows on such themes as Rembrandt’s landscapes and, more recently, the exhibition on Lucas van Leyden organized by CODART member Christiaan Vogelaar, have been critically acclaimed. But the museum’s collection is much, much broader. Even though the decorative arts are not the primary field of interest of most members of CODART, it is the focus of this short contribution.

The museum owes its name to the original function of its premises on the Oude Singel in Leiden. The building was designed in 1640 by Arent van ’s-Gravensande as a Lakenhal (Clothmakers’ Hall), where the meetings of the governors and syndics of the cloth industry were held, cloth was inspected and sold, legal redress could be sought, and the guild’s administration was kept. The building, an example of Dutch classicist architecture, provides suitable accommodation for the museum that presents the history of the city that was so closely tied to the textile industry. In 1868, after the building had ceased to serve its original purpose, its attic was designated to store the collection of historical artefacts that had gradually been taking shape at the town hall. 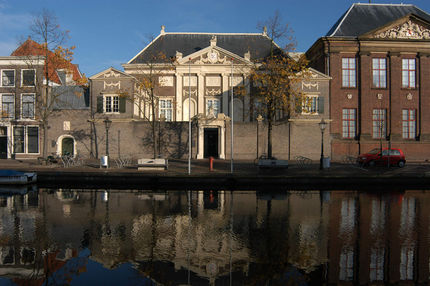 As is the case with many city museums, the municipal collection formed the basis of the Museum De Lakenhal. Among its treasures were Lucas van Leyden’s painting of the Last Judgment, as well as fine pieces of the Leiden civic plate, including a ewer and basin produced in 1641 by the Leiden silversmith Frans Maerschalck. The basin is decorated with a gold medal featuring the coat of arms of the city of Leiden and with an engraved escutcheon, likewise displaying the city arms, supported by a lion with a raised scimitar. The ensemble also contains four large salt-cellars, crafted by the Leiden master Barend Gast, which are circular and lobed in shape and surmounted by round finials. 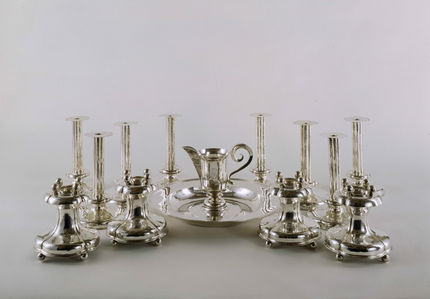 This type of object can also be found in seventeenth-century paintings. Eight candlesticks that correspond in size and design to the lobed form of the salt-cellars were commissioned in 1662 by the burgomasters of Leiden from an artisan in The Hague. This demonstrates the strong ties between the craftsmen of Leiden and those of neighboring artistic centers, such as Amsterdam and The Hague. Another highly important piece that was transferred from the town hall to the Lakenhal was the so-called Lanckaert tapestry. This tapestry was commissioned from the Delft weaver Joost Jansz Lanckaert in 1587, fifteen years after Leiden had been freed from the Spanish, when rebel Sea Beggars claimed the city for William of Orange. The tapestry depicts the route taken by the Sea Beggars on their march to liberate the city, and can thus be seen as the Leiden authorities’ declaration of allegiance to the Prince of Orange. The border was designed by the Leiden painter and magistrate Isaac Claesz van Swanenburg. 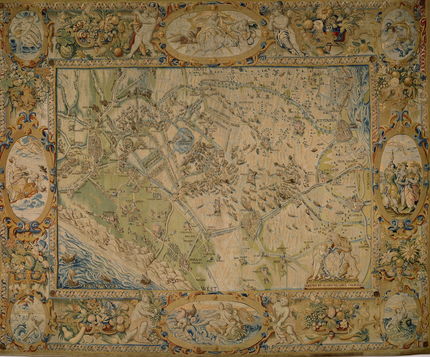 The building designed by Van ’s-Gravensande is more than mere accommodation for the museum’s collection; it is also part of that collection. This is demonstrated by the many parts of the collection that form a fixed part of the building. Located on the first floor of the old Lakenhal is the so-called Governors’ Chamber, where the governors and syndics of the cloth industry assembled. Even though the chamber has undergone inevitable changes over the years, various elements of its interior recall its original purpose and sumptuous furnishings. The consoles of the ceiling, which consists of secondary and sleeper beams, were carved by the Leiden wood-carver Albert Goosman. Above the mantelpiece hangs a portrait of five governors of the textile guild by the hand of Carel de Moor (1692). Its original frame contains the carved and gilded family arms of the governors portrayed, as well as the coat of arms of the city of Leiden, executed by the wood-carver Hendrik van Dijk. In the so-called Syndics’ Chamber on the other side of the large hall, the syndics (cloth inspectors) once assembled. One is reminded of the room’s function by the group portrait, specially made for the Syndic’s Chamber by Jan de Baen (1675), with its carved, semicircular frame, made to fit the form of the barrel vault of the ceiling and the decorated wall-paneling below. Both frame and decorations were executed by Albert’s younger brother Gerrit Goosman. In the 1930s this room was furnished with gilded leather wall-covering of 1649, which had been removed from the commissioner’s house known as the “Delftse Schouw,” likewise designed by Van ’s-Gravensande and situated on the tow path running alongside the River Vliet between Leiden and Delft. Even though it was not originally made for its present home, this wall-covering looks splendid in combination with the seventeenth-century chairs with “barley-sugar” twisted legs and the high desk with auricular carving by Gerrit Goosman. 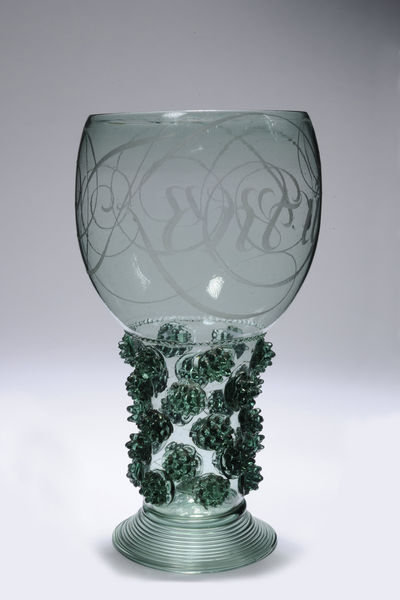 One of the syndics in Jan de Baen’s group portrait is Willem van Heemskerck, a cloth merchant who occupied a special place in the guild and the decorative arts of Leiden. Although his own textile business went bankrupt, Van Heemskerck held various prestigious offices in the guild, including that of syndic. In addition, he was an amateur poet and glass calligrapher. Van Heemskerck’s calligraphy with its characteristic swirling letters is well represented in the Lakenhal’s collection by fifteen pieces, including this roemer.

Another category of objects that entered the museum’s collection shortly after it was founded came from hospitals and almshouses that closed their doors in the nineteenth century. These items include an engraved glass that must have been used for toasts by the regents of the “Sint Catharina en Caecilia” hospital. The glass was engraved by Willem Robart for the regent Jan Alesoon. The two figures on the goblet, an old man and a madwoman, personify the two institutions that had been responsible for the care of the sick and elderly in Leiden since the Middle Ages. Robart based these figures on drawings (now kept in the Regionaal Archief Leiden) made by Frans van Mieris the Younger, numismatist, historian, painter and grandson of the famous Leiden “fine painter.” The glass was probably bequeathed to the hospital when Alesoon stepped down in 1747. 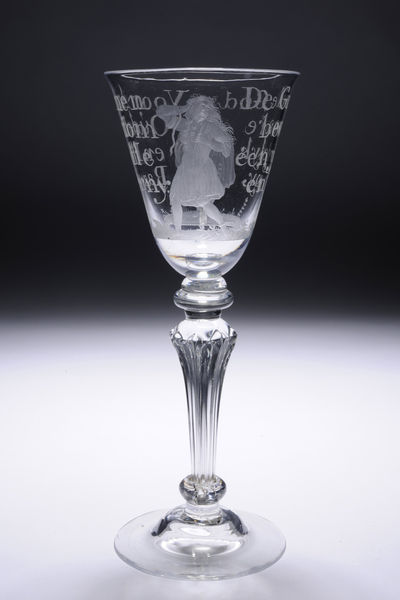 A generous bequest and subsequent donation by Carel and Cornelis Pape made it possible to add a new wing to the museum in 1921. While the Hartevelt Gallery, which opened in 1890, was the domain of painting, the Pape Galleries focused on the decorative arts. In accordance with the then prevailing ideas in the field of museology, two rooms were furnished as period rooms to provide suitable décor for the decorative arts.

The so-called Yellow Pape Gallery in the style of Louis XVI came from the house at Leidse Breestraat 24. The contents of this house were auctioned off in 1918, and the wall-paneling was installed in the museum soon after. The rooms in the house did not correspond exactly to the space in the museum, however, so the paneling had to be adapted to its new surroundings. The second period room was supplied with wall-paneling with elaborate carving in the style of Louis XIV, as well as an overdoor, an overmantel and a ceiling painting by Anthony Elliger (1739). The room did not come from a house in Leiden, however, but from premises in Arnhem, but this was no reason for the then director, J.C. Overvoorde, to reject this beautiful example of the Louis XIV style. The Pape Wing was built to accommodate the collection of Carel Pape, but its opening prompted the acquisition of further examples of applied art. The objects collected in this period – which included many smaller pieces of furniture, as well as various bequests and donations – were mainly of illustrative value in portraying “daily life” in various periods. They were seldom of exceptional quality, and did not always have an obvious connection with Leiden. 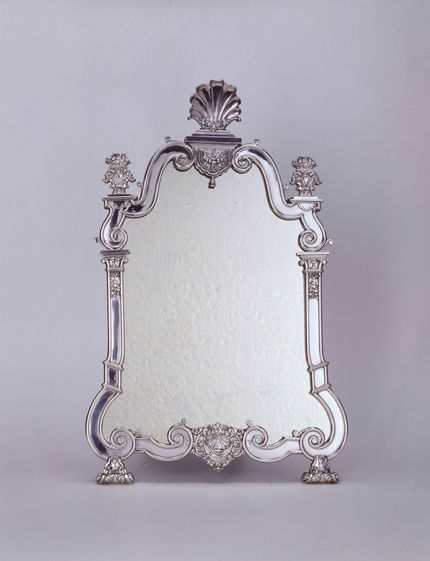 In recent years the applied arts have played a relatively modest role at Museum De Lakenhal. The collection has been enriched with several specific purchases and loans from Leiden artists, including a toilet mirror and two sauce boats made by Hendrik Fortman, a member of the famous family of silversmiths, as well as with purchases that fall outside the direct sphere of CODART, such as the substantial collection of earthenware from the Amphora factory in Oegstgeest, which produced pottery in the style of Rozenburg. Recent trends have caused the collection of decorative arts to retreat somewhat from public view for the benefit of a more modern museum display. Important pieces, such as the goblet presented by Elizabeth of Bohemia in 1641 to the city of Leiden as a token of her gratitude for providing her children with accommodation, have been relegated temporarily to the depot. The goblet, which is nearly eighty centimeters high, was executed by the Nuremberg-born Hague silversmith Hans Coenraet Breghtel in an elaborate auricular style. The cartouches all around contain minutely stippled allegorical representations, and a statue of the Winter Queen herself appears on the lid. The goblet will soon be on public display again. 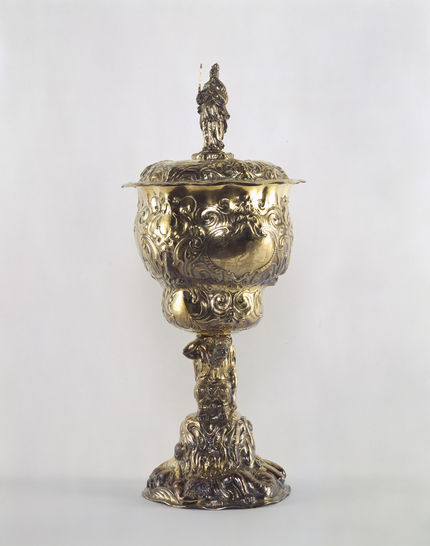 In 2010 the project Werk in Uitvoering (Work in Progress) prompted the museum to focus on its own collection: more than 13,000 objects were brought out of the depot and into view. A conveyor belt – which carried the objects past staff members, who described, examined and photographed them all – was visible to the public. This gave visitors a unique glimpse behind the scenes at the museum, and they were asked to give their opinion of the museum and its collection. This brought a number of long-lost treasures to light, and provided a wealth of information and valuable insights into the appreciation, history and formation of the collection. In accordance with the project, the museum will focus on the presentation of its own collection in the first half of 2012. All of this will strengthen the Museum De Lakenhal in its preparations for the planned renovation and extension. The new exhibition space will provide the permanent collection, including the decorative arts, with much more room.

A member of CODART since 2009,  Femke Diercks was Junior Curator of Decorative Arts at Museum De Lakenhal in Leiden until 1 February 2012 and is currently Junior Curator of Glass and Ceramics at the Rijksmuseum in Amsterdam.