In 1977 I completed my studies in art history at the University of Ghent. It was Professor R.A. D’Hulst who suggested that I write my thesis on a subject connected with tapestries, and this proved to be a harbinger of my later career. Not only was Professor D’Hulst an expert on the oeuvre of Rubens and other seventeenth-century painters of the Antwerp school, but he had also written one of the seminal works on the art of tapestry-making: Vlaamse wandtapijten van de XIVde tot de XVIIIde eeuw (Flemish Tapestries of the Fourteenth to the Eighteenth Centuries), published in 1965. In his view there was still a lot of research material to be unearthed in this field, and he was certainly right. Ever since then, my studies have concentrated mainly on Flemish tapestries of the seventeenth and eighteenth centuries.

After finishing my degree I was given the opportunity to work under Guy Delmarcel in the Cinquantenaire Museum (Jubelparkmuseum), where I classified and labeled the photographs of tapestries that successive curators had collected over the decades. It proved to be an incredibly edifying experience. 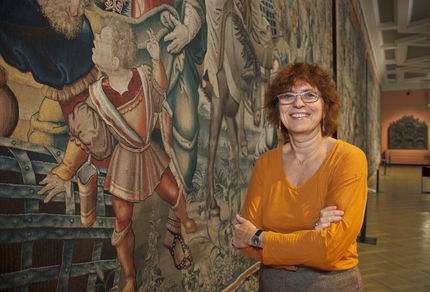 I therefore had the good fortune, already at the beginning of my career, to have two of the best teachers in the field – each of a different generation and with a different approach. In my spare time I mastered the technical and practical side of weaving and learned how to analyze textiles.

Unfortunately, my temporary job came to an end after three years. In Belgium it was common in those days to set up temporary projects with government aid in order to provide work for young unemployed people in the cultural and social service sectors. One short-term project followed another, in the course of which inventories were drawn up of various textile collections in Flemish and Walloon churches, sometimes coupled with conservation treatments and/or exhibitions. This program also had an offshoot in South America. In 1987-88 I worked for a couple of months as a consultant on a project organized by the General Board for Development Cooperation that involved the restoration of art objects, particularly textiles, and the installation of a museum in a convent in Quito (Ecuador).

Later I either worked on or curated various large exhibitions mounted by what was then the ASLK Bank (now part of Fortis Bank). This was an interesting experience, even if the connection with textiles was sometimes rather tenuous. I learned how to organize exhibitions for a large public – no longer working on my own with a limited budget, as had previously been the case, but with an entire team and ample funding at my disposal. In the meantime I tried to keep alive my interest in textiles, particularly tapestries, by adding to my private documentation and conducting research.

My documentation proved to be very useful when I began to work for the city of Oudenaarde, where in 1993 I organized the double exhibition Kleur voor wand en vloer (Color for wall and floor). The historical component consisted of carpets and tapestries from the studio of Elisabeth De Saedeleer, a trendsetting weaver in the 1920s and 1930s. A selection of modern tapestries was also shown. That collaboration resulted in a second assignment, this time to catalogue and carry out research on the Oudenaarde tapestries. More than 3,000 photographs had been collected, and they formed the ideal basis for a large retrospective exhibition and catalogue:

Oudenaardse wandtapijten van de 16de tot de 18de eeuw (Oudenaarde tapestries of the 16th to the 18th centuries). The exhibition, held in 1999, was a great success. The project was awarded the title “Cultural Ambassador of Flanders 1998-99” and the catalogue won the special “Prize for the History of Textiles in Flanders,” bestowed by the VZW Stichting Etienne Sabbe and the province of West-Vlaanderen.

Since 2000 I have lectured on the history of textile arts to students taking the Master’s degree in textile design in the School of Arts at Hogeschool Gent. There are also a number of committees and boards of which I’m pleased to be a member: the Direction Council of the Centre International d’Etude des Textiles Anciens (CIETA), the Scientific Advisory Board of the MoMU (Modemuseum Antwerpen), the Art and Culture Committee of the Flemish Parliament, and, since 2011, the program committee of CODART.

In 2000 I returned to the Cinquantenaire Museum (Jubelparkmuseum) as curator of the tapestry and textile collection. It felt like a homecoming. As a Flemish specialist on tapestry production in Flanders, it is wonderful to be able to work with the largest collection of tapestries in Belgium. The collection is not a historically sequential one, like the collections in Madrid and Vienna, but was formed by coincidence, as are most collections.

It is indeed remarkable that very few tapestries were preserved in Belgium, even though the majority of tapestries in collections worldwide were made in the Southern Netherlands. Most tapestries were produced, of course, for the foreign market. The collection was formed after the foundation of the museum in 1835. The first piece, acquired in 1844, was a Northern Netherlandish tapestry that was donated to the museum. Remarkably, only the fourth tapestry to enter the collection (in 1864) was produced in Brussels: The Descent from the Cross from the beginning of the sixteenth century. 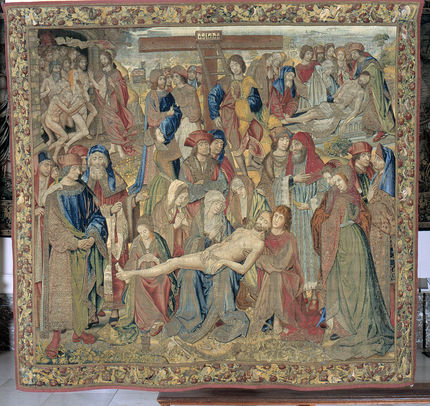 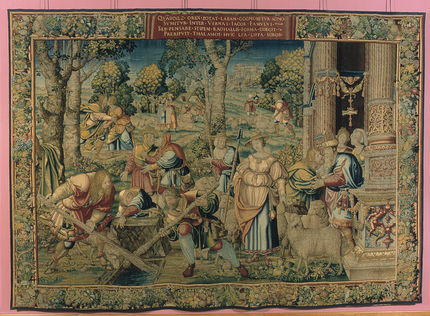 Our collection numbers 170 tapestries and is therefore not very large, but it offers a beautiful and complete overview of Flemish tapestry production of the fourteenth to the nineteenth centuries. Moreover, it contains a number of top-notch pieces, such as the Tournai tapestry, over nine meters in width, which dates from ca. 1445-55 and depicts Scenes of the Passion, the ten-piece set illustrating the Story of Jacob, designed by Bernaert van Orley, and, from a later period, the five pieces from the set of tapestries depicting the Story of Achilles by Peter Paul Rubens.

The tapestry we are asked to lend out more often than any other is the Legend of Notre Dame du Sablon. Of the four-piece set, also designed by Bernaert van Orley, the museum has a fragment of the first and the last tapestry. 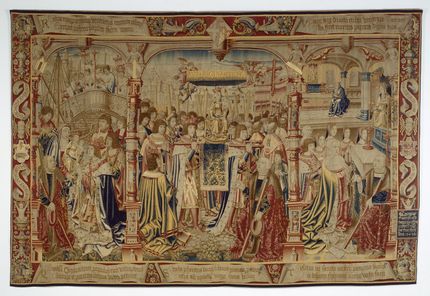 The appearance in this 1518 tapestry of the portraits of various members of the Habsburg dynasty, including the later Emperor Charles V, make it highly suitable as an illustration of historical themes.

Of the entire collection, only forty tapestries hang in the museum galleries, intended as a presentation of the decorative arts of the fourteenth to the nineteenth centuries. The display is changed every three years, so that other tapestries can be shown.

We have held several small tapestry exhibitions, the most important of which was Krijgstumult aan de Marokkaanse kust (at its American venue it was called The Invention of Glory: Afonso V and the Pastrana Tapestries).

This exhibition, mounted to mark the restoration of the four huge Tournai tapestries (each 4 x 11 m), made a big impression. They tell the story of the conquest of the Moroccan cities of Arzila (Asilah) and Tangier by King Alfonso V of Portugal. This important historical event took place in August 1471, and the tapestries must have been woven shortly afterwards.

Of the textile collection, only a fraction of the more than two thousand fragments (mostly silk fabrics from the thirteenth to the twenty-first centuries) can be shown, owing to problems of conservation. Here, too, we try to change the display regularly. I have already organized temporary presentations, making use of display cases installed in the galleries, to show textiles of the various periods.

As the only curator in the department I am expected to perform a variety of duties, such as digitizing the collection and handling loan requests.

Now and then private individuals offer to give us their tapestries on temporary loan. So far the proposals have been interesting enough for such requests to be honored. Alternating the tapestries on a regular basis keeps the display fresh. To enable us to change the display, we actively seek sponsors willing to pay for conservation treatments. The King Baudouin Foundation is a big help in this regard. 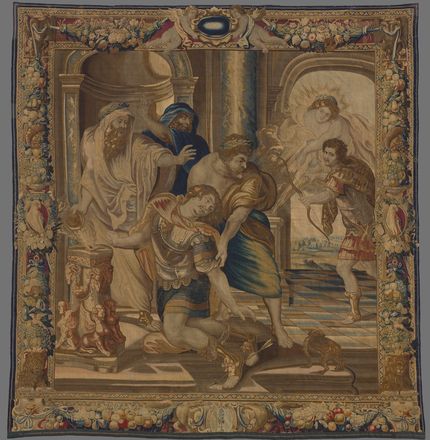 The time remaining for scholarly study is obviously limited. For a number of years I concentrated on research that resulted in an undergraduate thesis: “De wandtapijtproductie in Oudenaarde rond 1700 in relatie met de andere Vlaamse centra” (“Tapestry production in Oudenaarde around 1700 in relation to the other Flemish centers”).

During preparations for the exhibition held in Oudenaarde in 1999, important holdings were discovered in the city archives: a collection of documents dating from 1669 to 1737 from the estate of the Van Verrens, a family of tapestry-weavers of Oudenaarde: personal letters, commercial correspondence, workbooks, memorial books and financial statements. My research focused mainly on the painters who supplied the designs. Both the figure painters and the landscape painters appear to have supplied cartoons to studios in Antwerp, Oudenaarde and Brussels. I have treated different aspects of this collaboration in various articles, and I have also researched the interaction between these cities around 1700. An important factor in the success of tapestries in that period was the contribution of the landscape painters. Their input was therefore examined in detail, and each element traced back to extant tapestries.

I’m now putting the finishing touches on a manuscript that will contain most of the results of my research, which I hope to publish in 2013. At the same time I have a project in the pipeline: an exhibition designed to highlight the interaction between the landscapists’ paintings and the work they did for the tapestry industry. Whether this show can be realized in the foreseeable future depends on the director’s decision. The museum is in a state of reorganization and far-reaching reforms are pending; unfortunately, it is uncertain what the authorities intend to do with our museum and the collections of decorative arts. 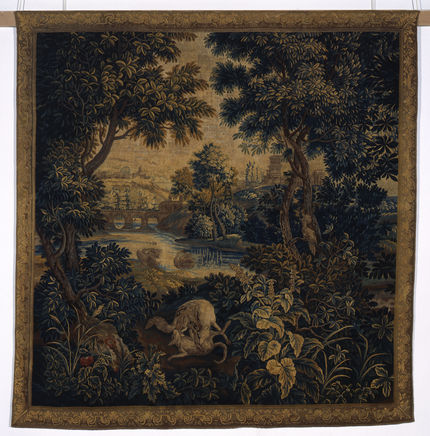 Ingrid De Meûter is curator of tapestries and textiles in the Cinquantenaire Museum in Brussels. She has been a member of CODART since 2010.