This article was first published in January 2011 on the CODART website, as part of the Curator in the Spotlight section.

I wrote these lines in November (2010), the month when Czechoslovakia’s Velvet Revolution took place in 1989. This is significant for me, for had this groundbreaking event not occurred, I might never have become a curator of Dutch Art.

My studies in political science, German philology and art history at the Ruprecht-Charles-University in Heidelberg focused on 19th-century French and German art. After receiving a master’s degree in 1992 for my thesis on Carl Gustav Carus and his Letters on Landscape Painting (1821-1835), I spent four very inspiring months as a research assistant in the department of old European art at the Národní galerie v Praze (National Gallery in Prague). At that time I had the great fortune of meeting CODART member Hana Seifertová. Helping her prepare an exhibition on the still-life painter Georg Flegel (1566-1638) – jointly organized with the Historisches Museum in Frankfurt – was a real eye-opener and stimulated my enthusiasm for Old Masters and curatorial work.

Following another sojourn in Prague in 1993 during which I was in charge of a collateral exhibition project between Prague’s Strahovský klášter (Strahov Monastery) and the Bayerisches Nationalmuseum in Munich, I settled there in 1995 to work at the Národní galerie v Praze, first as an exhibition curator, and then as curator of Dutch art. The exhibition Dialogue with Old Masters: Prague cabinet painting 1690-1750 (together with Hana Seifertová, 1997; later shown at the Herzog Anton Ulrich–Museum in Braunschweig) was a wonderful introduction. In the same year, we started research for Et in Hollandia ego ... Dutch painting of the 17th and early 18th centuries, a long-term display of Dutch art from the depots of the Národní galerie v Praze at

The past limitations on studying and exhibiting the rich holdings of the Národní galerie v Praze meant there was ample opportunity to come up with a host of new findings – there could be no better motivation for initiating a project to fill the gap created by the lack of a collection catalogue. Work on the catalogue began in earnest in 2006, when I returned to the gallery after a six-year maternity leave in which I cared for my three children. This project is expected to come to fruition in late 2011 with a printed English version of the catalogue. It is being realized together with Stefan Bartilla and Hana Seifertová, with the support of a grant from the Grantová agentura České republiky (Czech Science Foundation) and the generous advice provided by the RKD and many colleagues within the CODART network. 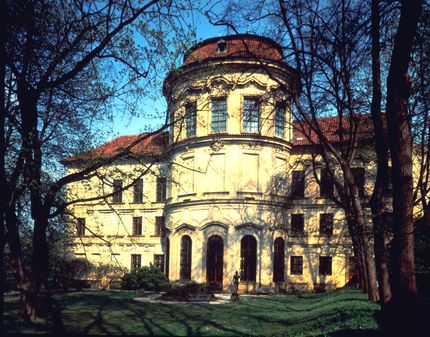 The origins of the museum’s holdings – a touching story – go back to the end of the 18th century. In the spirit of the Enlightenment and fearing further cultural decline in the shadow of Imperial Vienna, in 1796 the Bohemian nobility founded the Society of Patriotic Friends of the Arts in Bohemia. In the beginning, loans from their private collections were assembled and presented to the public in Czernín Palace, rented by the Society. In 1811 Sternberg Palace was purchased, which today houses the Old European Masters. In 1885, the society established a Picture Gallery in the Rudolfinum. This collection, enriched over the years by acquisitions, donations and bequests, became the property of the Czechoslovak State in 1937 and was renamed the National Gallery in 1939. Currently, the holdings are spread over seven different locations in Prague, with the old European masters once more displayed in Sternberg Palace on Prague Castle Hill.

Dutch 17th and early 18th-century paintings form the most extensive part of the collection of old European art and with some 600 works of art represents the leading body of Dutch cultural heritage within the Czech Republic. Around 140 paintings are on regular display, including several long-term loans, for instance to the Alšova jihočeská galerie (Aleš South Bohemian Gallery) in Hluboká nad Vltavou to complement their own Dutch and Flemish holdings.

Unique masterpieces deriving from eminent collections dominate Prague’s holdings of Dutch art, and include Rembrandt’s Scholar in his Study from the famous Nostitz collection and Frans Hals’ Portrait of Jaspar Schade donated to the gallery by Johann II, Prince of Liechtenstein, in 1890, together with another highlight, Gerard Dou’s Young Lady on a Balcony. Not to be forgotten is Aert de Gelder’s beautiful Vertumnus and Pomona, given by the generous bourgeois collector and patron Josef Hoser in 1843. 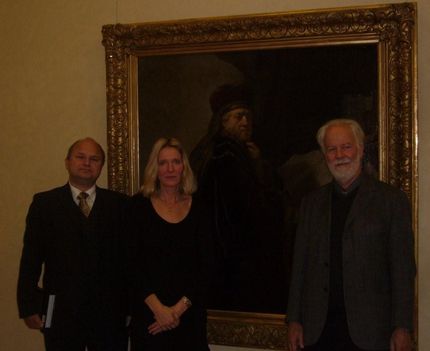 In general, Prague’s collection of Dutch paintings reflects the prevailing tastes of late 18th- and 19th-century Central European collectors whose financial circumstances were fairly modest. The Utrecht and Leiden schools, for example, are poorly represented.

In addition to the above-mentioned paintings, vast sections of the collection have yet to be inventoried with respect to fundamental aspects such as condition, attribution, subject and provenance. For me, dealing with a myriad of unknown or still uncatalogued paintings constitutes a challenging and exciting task as well as a fruitful undertaking. Many (re-)discoveries have been made possible, thanks in part to restoration, technological examination and dendrochronological analysis (by Prof. Peter Klein, Hamburg).

We even succeeded in locating a painting that had been stolen in 1990, a Battle scene by Jan Martzen de Jonge, in a private collection (see CODART News 11 September 2007).

In the course of our research, another fascinating aspect of the collection became more pronounced, namely the surprising wealth of lesser-known artists rarely represented in public collections. Good examples of this are new attributions to artists such as the landscape painter Adriaen van Diest (1655-1704), Jan van Gool (1685-1765), author of the Nieuwe Schouburg der Nederlantsche Kunstschilders (1750/51), the Utrecht artist W(?). Hasselt (active 1675-1695) and the Amersfoort portraitist Thomas Jansz. van Veenendaal (1618/38-1673).

One of my personal rediscovered favorites is the 1636 Portrait of a Young Woman with a Fan. It can be identified as the painting mentioned by Théophile Thoré-Bürger in 1864 as being in the collection of Émile and Isaak Pereire in Paris and attributed to Aelbert Cuyp. On its journey through prominent collections - such as that of John W. Wilson in Brussels - and its donation by Johann II, Prince of Liechtenstein to the Society of Patriotic Friends in 1891, the portrait was variously attributed to Benjamin Gerritsz. Cuyp, Jacob Gerritsz. Cuyp and Paulus Moreelse. The lovely, softly modeled likeness of an anonymous, seemingly shy young lady can now be given to the Rotterdam portraitist Jan Daemen Cool (1589-1660). Dressed in a somewhat provincial, conservative-looking costume for the year 1636, she holds a precious folding fan imported from China or Japan in keeping with the latest fashion. Formally, the likeness resembles the standardized type used to portray women as pendants to portraits of their husbands. However, the sitter’s clothing indicates that she is still unmarried: she wears a so-called round dress – the bouwen – reserved exclusively for virgins in contrast to the wide dress – the vlieger – worn by married women. 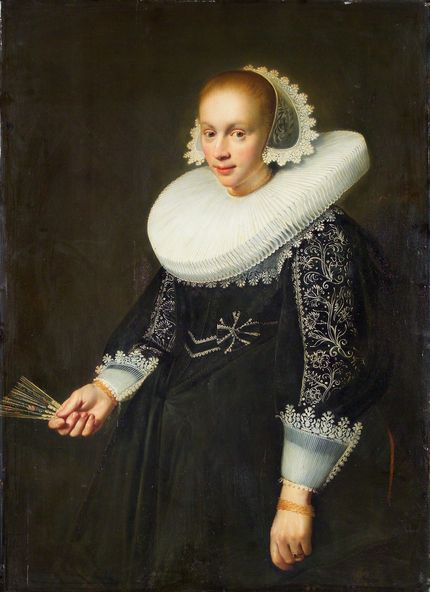 The “Rembrandt and friends project”

We are currently organizing the exhibition Rembrandt and friends: celebrating Dutch painting in Prague (December 2011-April 2012) to celebrate the publication of the Inventory Catalogue in 2011 and present some major discoveries. This show – with about 150 of our finest works of art – is the first survey of Dutch art to be held in the Czech lands in several decades. To underline its festive character, we have invited distinguished institutions to lend us works with special relationships to paintings in our collection. The Rijksmuseum in Amsterdam has agreed to send their Rembrandt’s Man in an Oriental Costume of 1635, which features the same sitter as in his Prague Scholar dated 1634. Rembrandt painted the same person a year earlier in a work in the Alte Pinakothek in Munich, which we have also requested. As a wonderful overture and introduction to the exhibition and project, we recently had the pleasure of hosting Gary Schwartz, who spoke on Rembrandt’s Orientals in October 2010. Another significant loan is the Portrait of Jaspar Schade by Cornelis Jonson van Ceulen (Rijksmuseum Twenthe, Enschede). It was commissioned nine years after the famous portrait of the same sitter by Frans Hals in Prague.

We sincerely hope that other loans requested from the Staatliche Museen, Berlin, the Kunsthistorisches Museum, Vienna and the Amsterdams Historisch Museum will keep company with works from Czech private collections for Rembrandt and friends.

To end, on behalf of myself, Hana Seifertová and Stefan Bartilla I would like to thank all of our colleagues who have kindly shared their knowledge with us in the course of our research and supported our exhibition project. We trust that next year’s edition of the Inventory Catalogue will be rewarding for all of you, too. Finally, please accept our cordial invitation to Rembrandt and friends in Prague 2011-2012 and count yourselves among the “friends”!

The exhibition Rembrandt & Co.: stories told by a prosperous age took place from February until May 2012 and the catalogue mentioned by Anja Ševčík appeared in January 2012.

Anja Ševčík is Curator of Dutch Painting at the National Gallery in Prague, Czech Republic.