This article was first published in July 2011 on the CODART website, as part of the Curator in the Spotlight section.

Nataliya Markova studied art history at Moscow University. She graduated in 1978, and took post-graduate courses from 1978 to 1981. In 1983 she received her Ph.D. for her thesis entitled Netherlandish Romanismus: the problem of Italian influence on Netherlandish art in the 16th century.

Dr. Markova has been working in the printroom of the Pushkin Museum since 1981 as curator of 16th- to 20th-century Netherlandish, Dutch and Flemish prints (and drawings as of 2001). “In one’s capacity as museum curator, I believe that actually working with the collection is the best place for an art historian to put his knowledge into practice”, she says. Moreover, in her view one of the curator’s main tasks is to make the collections accessible to the public in the form of exhibitions, catalogues and books.

In several exhibitions held in the 1980s (unfortunately without catalogues), Nataliya tried to show the variety of Antwerp’s print production in the 16th century by 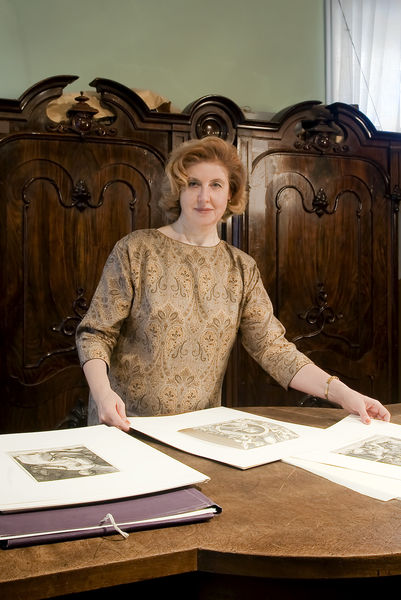 featuring the famous series after Pieter Brueghel the Elder; the virtuosity of the Mannerist engravers Hendrik Goltzius and artists in his circle; and the main features and the leading masters of 17th-century Dutch etching (this exhibition traveled to regional Russian towns).

She also began cataloguing the 16th-century prints in the collection (part of them – works by Lucas van Leyden – was presented in an exhibition and published in a catalogue in 2002). Naturally, Rembrandt was not overlooked: in 1992 all of his etchings in the Pushkin Museum and in the Hermitage were on display; in 1993 60 prints by Rembrandt were shown in Turku (Finland) as a part of the large exhibition of 17th-century Dutch art from the Pushkin Museum; and etchings and drawings once thought to be by Rembrandt constituted a major part of the Rembrandt anniversary exhibition held in the museum in 2006.

In 2000 Nataliya Markova was appointed head of the printroom and for the next 10 years was involved in engineering and carrying out the Pushkin’s general plans for reconstruction and future development as well as for its current work. While she succeeded in publishing collection catalogues on important holdings of prints and drawings, expanding the printroom’s staff with new curators, partly renovating the storage area and tending to many other necessary and useful tasks, she had virtually no time for her own curatorial activities. She finally breathed a sigh of relief when she laid down these responsibilities in 2010. She subsequently organized the exhibition Treasures from Moscow. Dutch drawings from the Pushkin Museum in the Bonnefantenmuseum in Maastricht together with Lars Hendrikman. This show also marked the publication by the Stichting Cultuur Inventarisatie (SCI), in collaboration with the RKD,  of the English-language version of the catalogue of the drawings by artists of the Low Countries in the Pushkin Museum. Both the exhibition and the catalogue are vital steps in disclosing the Moscow collection to the general public and to specialists around the world.
The project for 2012 is an exhibition and a catalogue of the once private collection of the distinguished engraver Nikolay Semyonovich Mosolov (1847-1914), which was donated to the printroom in 1914. The best 17th-century Dutch drawings and prints, including etchings by Rembrandt, come from the Mosolov collection. Mosolov was a third-generation art collector: he and his father were connoisseurs and catalogued their collection, affording us the rare opportunity of following the transformation of this remarkable family collection throughout the years as it passed from one owner to the other.
In the coming years, Nataliya also wants to include a page on the Dutch and Flemish drawings and prints in the museum’s new site. Of course, she is also involved in the program of the Russia-Netherlands cross-culture year 2013. The final projects have yet to be determined, but it is already clear that one or two exhibitions of works on paper are in the offing.

Netherlandish, Dutch and Flemish masters in the Pushkin Museum’s printroom

Alongside the State Hermitage Museum in St Petersburg, the Pushkin State Museum of Fine Arts in Moscow (which opened in 1912) is the largest museum of world art in the Russian Federation and the same holds true for its printroom, 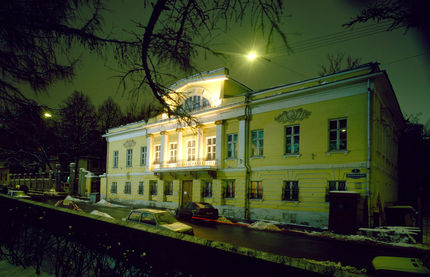 which is home to more than 370,000 works on paper. With all of its holdings (prints and drawings by 15th- to 20th-century Western European artists, 20th-century American and Eastern European artists, 17th- to 21st-century Russian artists, 18th- to 20th-century Japanese prints, paintings and books, sub-collections of ex-libris, posters, portraits and topography), the printroom is not only the Pushkin’s largest department, it is a complete museum of graphic art in itself. In 1965 the printroom moved from the main building to a characteristic Moscow residence built by a nobleman in 1826 on a nearby side street.

The collection of works on paper by Netherlandish, Dutch, Flemish and Belgian artists consists of about 10,000 prints and 700 drawings. While it may not be a very large collection compared to the other schools (German, French, Italian), it is nevertheless very important and comprehensive particularly with respect to the 17th-century Dutch school.

The latter contains sheets by almost all of the leading artists of the period and allows us to trace the development of drawing in the Netherlands from the 17th century - with the late Mannerist Abraham Bloemaert to the early Dutch artists Hendrik Avercamp and Esaias van de Velde; genre artists Adriaen van Ostade, Cornelis Bega, Cornelis Dusart, Jan Miense Molenaer, and Adriaen van de Velde; landscapists Jan van Goyen, Pieter de Molijn, and Herman Saftleven; seascapists Ludolf Bakhuizen and Willem van de Velde I; portraitists Gerard ter Borch II and Cornelis Visscher II; Italianates Andries Both, Bartholomeus Breenbergh, Nicolaes Berchem and Thomas Wijck; animalists Paulus Potter and Cornelis Saftleven - up to Isaak Moucheron, Jacob de Wit and Cornelis Troost in the 18th century. A special group consists of drawings by Rembrandt and his followers, including Ferdinand Bol, Jan Victors, Aert de Gelder, Abraham Furnerius and Gerbrandt van den Eeckhout. The Pushkin Museum boasts a large number of drawings (26) by Allaert van Everdingen. About 2000 etchings in early states and impressions represent these same artists and many others as peintres-graveurs; the 360 etchings by Rembrandt are the precious core of this collection.

The number of Southern Netherlandish and Flemish drawings is smaller and with a few exceptions (such as works by Peter Paul Rubens, Jacob Jordaens, Abraham Diepenbeck, Jacques d’Artois, Hans Bol, Jan Brueghel, Maerten de Vos, Aegidius Sadeler and Otto van Veen, among others) their quality is not equal to that of their Northern Netherlandish and Dutch counterparts.

Selected works in the collection

Of all of Rembrandt’s prints Nataliya Markova is most charmed by the master’s landscapes. The three trees occupies a special place among them. It synthesizes elements found in other etchings by the master (a panorama view, an elaborate foreground with a group of trees) in an impressive, emotional image of nature. This fairly small sheet can be enlarged to the size of a monumental canvas without losing its compositional integrity. One continues to discover more and more details in it. The scenery is full of life with “children of nature” – amorous couples and animals - hidden in a shadow in the field, a cart moving along the dike or the artist sketching a magnificent picture. Rembrandt used all of the technical tricks at his disposal – repeated etching, by means of both burin and dry point – to express the play of dark and light, the movement of the clouds, the atmosphere permeating the foliage of the trees and the silhouette of the town vanishing in the distance. In describing the forms of the visible world, Rembrandt’s lines and strokes nevertheless retain a good deal of abstraction, which makes his style unexpectedly modern.

Peter Paul Rubens, The effigy of the Virgin and Child borne by angels, ca. 1608

Moscow holds five drawings by Rubens (two are double-sided), all from the artist’s early years, 1601–1615. Although this group is small, the variety of types, techniques and styles represented in it is remarkable: from spontaneous sketches, laying down the “primary idea” of the future painting on paper, studies of antique sculptures in Rome to an elaborate modello, like this one. 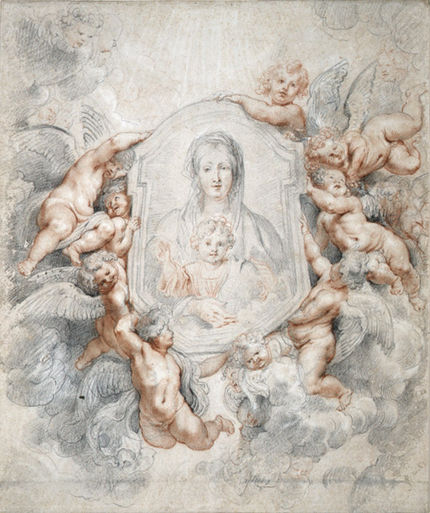 This drawing is the second version for the upper section of an altarpiece for Santa Maria in Vallicella (or the Chiesa Nuova) in Rome that Rubens was commissioned to paint by the Roman Congregation of the Oratory of San Filippo Neri. The altarpiece was designed to frame the 16th-century fresco of the miracle working Madonna della Vallicella, which had been transferred to the altar at some time.

Here we see the artist at his best. The folio drawing gives us a perfect idea of a Baroque altarpiece full of dramatic illumination and powerful movements intended to arouse the viewer’s emotions. It is drawn in the Italian trois crayons technique, popular in the late 16th century, which appealed greatly to a colorist like Rubens. The “garland” of angels (akin to antique putti) and the face of the Virgin and the Child are done in sanguine, stressing the body’s incarnadine; the sfumatto of the clouds is in black chalk; and the light coming from heaven and its play on the figures below is conveyed in white chalk. After a century of attempts in this respect, the artist from the Southern Netherlands succeeded in articulating the three-dimensional classical forms with a freedom equal to that of his Italian contemporaries. The diversity of poses and the foreshortening of the angels are the result of studies of antique sculptures and Renaissance art. Rubens developed this composition in some other works (a drawing in the Albertina, and an oil sketch in the Akademie der bildenden Künste in Vienna), changing the poses and the number of angels. All of these works were united in the exhibition Peter Paul Rubens (2004, Albertina in Vienna), which afforded an exciting opportunity to follow the artist as he developed the initial composition.