In the Baroque era the Duchy of Braunschweig-Wolfenbüttel, part of the German Nation of the Holy Roman Empire, was among the smaller lands of no great political significance, yet it was a flourishing center of art and culture in the seventeenth and eighteenth centuries. It was here that the

extremely art-loving Guelph Duke Anton Ulrich of Braunschweig-Wolfenbüttel (1633-1714) created a realm of artistic magnificence. The second son of Duke August the Younger, an erudite collector, Anton Ulrich was not his father’s designated successor. Zealously pursuing his intellectual and artistic education, he became one of the most important writers of the German Baroque. Anton Ulrich’s brother, Rudolf August, nevertheless gave him a role in government and this lent him new authority and probably also provided him with the financial means to build up a prestigious collection of art. In 1688 the cornerstone was laid of Salzdahlum, Anton Ulrich’s summer palace, which was officially opened with much pomp and splendor in 1694 (fig. 1). The half-timbered building no longer exists, 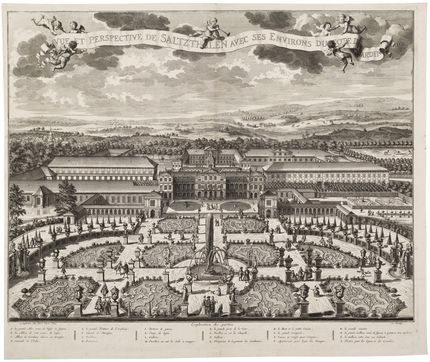 but prints convey an idea of the extent and magnificence of the former residence and grounds. Even in old age, the duke was expanding his artistic universe, and in 1704, after the death of his brother, who had no sons, he became the absolute ruler and could pursue more forcefully the expansion of his collections.

The surviving works testify to the duke’s great powers of discernment, which put him in a position to amass a truly superb collection. Most of the information we have concerns the formation of his painting collection, in which Netherlandish works play a prominent role.1 This collection, which survives almost intact, was considerably enlarged by Anton Ulrich’s descendants, particularly by his

great-nephew Carl I (1713-1780, reigned from 1735), who contributed new highlights to the collection in the Age of Enlightenment. In 1754 he put his holdings on public display, thus establishing the first museum on the continent of Europe. Braunschweig’s Herzog Anton Ulrich-Museum, heir to the collections of Duke Anton Ulrich, pays tribute to its patron on the 300th anniversary of his death with an exhibition that runs from 10 April to 20 July 2014.

The construction of Schloss Salzdahlum, begun in 1688, was accompanied by the systematic acquisition of paintings, which soon formed one of the most impressive galleries in Germany. An important stimulus to these developments was the Dutch art market, where the growing presence of auctions and auction houses made it possible to amass an extremely prestigious collection in a very short time. Following his father’s example, the duke cooperated with such agents as Jan van Beuningen, David Bueno de Mesquita, and Daniel and Antonie de Deutz, who worked for him in Amsterdam, acquiring paintings, jewels and tapestries for Salzdahlum.

The outward appearance of Schloss Salzdahlum not only echoed French examples but also displayed Dutch influences in particular. It was compared to Honselaarsdijk Palace, to Amsterdam’s newly built town hall, and to the Mauritshuis and Huis ten Bosch in The Hague. Its interior featured, among other things, a Dutch pronkkeuken (a kitchen intended only for show), the walls of which were decorated with Flemish hunting still lifes and kitchen scenes. 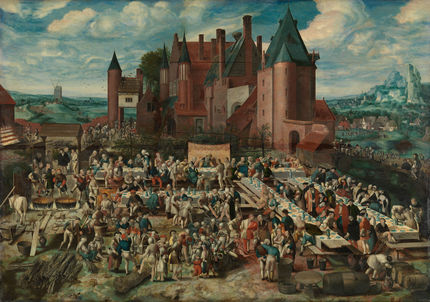 In the course of the palace’s extension, more and more rooms were devoted entirely to art. A separate, sixty-meter-long picture gallery – the first in Germany – was built between 1702 and 1704. It formed the center of a suite of rooms containing other galleries and cabinets, which housed departments overflowing with sculptures, prints and drawings, and every form of applied art. Here, for the first time, objects were presented as autonomous artworks and not merely as decoration.

In addition to works from Italy and Germany, these rich and multi-faceted holdings were dominated mainly by Flemish and Dutch paintings of outstanding quality. Together with Lothar Franz von Schönborn (1655-1729) and Johann Wilhelm von der Pfalz (1690-1716), Anton Ulrich was one of the first to collect, in grand style, Netherlandish paintings outside the Dutch Republic. 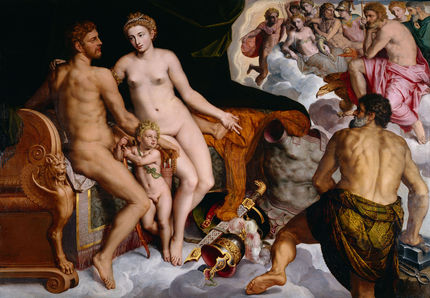 Anton Ulrich could build on a small collection that he had inherited from family members. It included some very good pictures, among them works by Lucas van Valckenborch and Roelant Savery, and perhaps the paintings by the Braunschweig Monogrammist, such as his Parable of the Great Banquet of the Rich Man (fig. 2). Anton Ulrich also purchased works by older masters, including Maerten van Heemskerck’s Baptism of Christ and Willem Key’s Mars and Venus Surprised by Vulcan (fig. 3). A contemporary description of the latter painting emphasizes its narrative quality and life-size figures. From the period around 1600 Anton Ulrich owned, for example, a number of works by Cornelis Cornelisz van Haarlem, whose Deluge is still the most important piece by this artist in the Braunschweig collection. 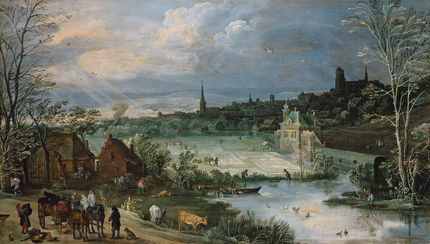 Two imaginary views of ancient Rome by Paul Bril and a still-complete series of The Four Seasons (fig. 4) by Joos de Momper and Jan Brueghel the Elder put into perspective the assertion that Anton Ulrich was not interested in landscape painting. The antique subject matter obviously ennobles Bril’s depictions, and Brueghel’s narrative figural groups certainly appealed to the literary sensibilities of the Baroque poet-duke. 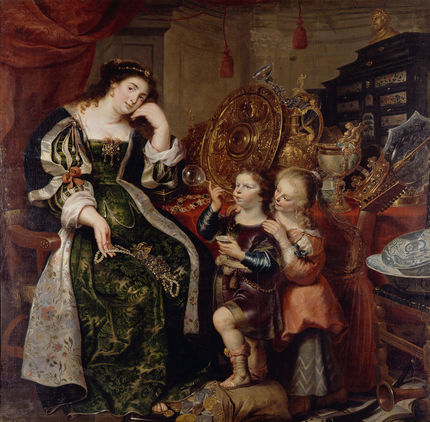 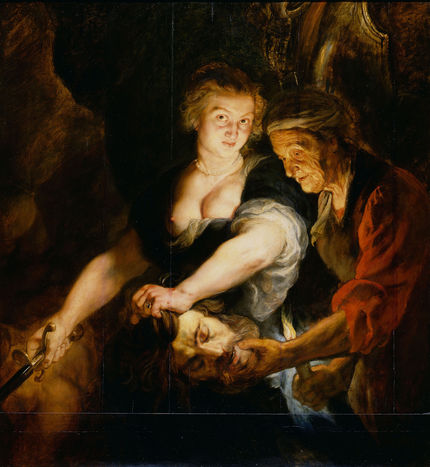 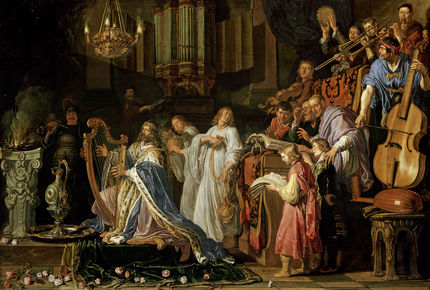 Among the various Flemish cabinet pieces in the collection, David Teniers’s Alchemist and works by Frans Francken the Younger epitomize the traditional character of the duke’s holdings.

Of the Dutch paintings, Abraham Bloemaert’s Nativity, a nocturnal piece with Caravaggesque references, has come to occupy a special position. It is the only Dutch picture to appear in a volume, published in 1710, of seventeen reproductive prints of works in the Salzdahlum gallery.

On the whole, however, Rembrandt and his circle are foremost among the Dutch artists: it was probably no coincidence that the poet-duke owned three works by Rembrandt’s teacher, Pieter Lastman, a narrator of biblical history and stories from classical antiquity. The Braunschweig gallery still boasts Odysseus and Nausicaa and the remarkable David in the Temple (fig. 7). 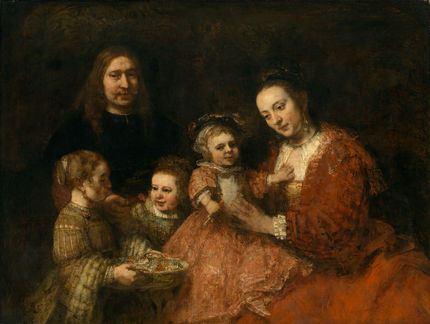 Three of as many as seventeen paintings formerly attributed to Rembrandt have stood up to critical assessment: the finely painted pendant portraits of 1632/33 of a lady and gentleman, and the Noli Me Tangere of 1651. Of the copies (previously not recognized as such), the copy after the Circumcision of Christ, delivered to Frederik Hendrik in 1646, deserves special consideration. This replica, executed by a pupil of Rembrandt, gives an impression, at least, of the lost original.

The sources do not say whether Anton Ulrich also bought the most important of the works by Rembrandt that are currently in Braunschweig. The master’s late, deeply moving Portrait of a Family (fig. 8) and his exceptional Stormy Landscape of the late 1630s were, like the majority of the paintings in the collection, first catalogued as part of 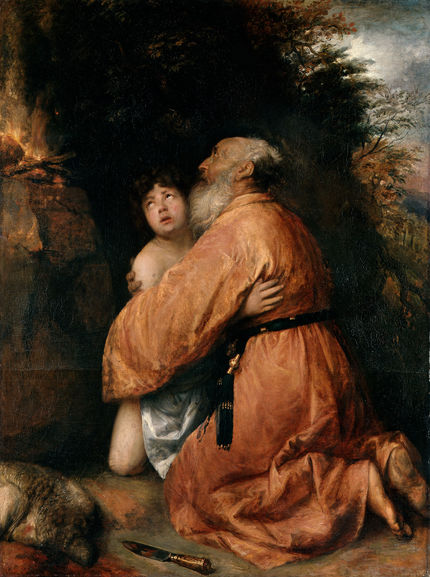 the holdings between 1737 and 1744. It cannot be ascertained, therefore, which of these acquisitions were made by the duke and which by his son, August Wilhelm. However, it is beyond doubt that Anton Ulrich was lucky enough to purchase the two pictures by Jan Lievens that are now in Braunschweig.

The Sacrifice of Isaac (fig. 9), perhaps Lievens’s most impressive work ever, equals Rembrandt in its emotional expressiveness. It is possible that Anton Ulrich was particularly interested in a fact already pointed out by Philips Angel, namely that Lievens based his composition not on the usual pictorial formula but on a text by Flavius Josephus.

The large-format paintings by Jan Victors, a pupil of Rembrandt, also indicate a close connection between Anton Ulrich’s collection and the fashionable paintings that decorated Amsterdam’s new town hall. One therefore gets the impression that at least some of the works in a similar style by Gerbrand van den Eeckhout, Ferdinand Bol and others were acquired by Anton Ulrich. The small cabinets, by contrast, boasted exquisite examples of Feinmalerei, such as the nocturnal pieces attributed to Gerrit Dou and his Self-Portrait, which is still part of the collection.

One of Anton Ulrich’s few – and therefore all the more spectacular – genre paintings is Johannes Vermeer’s Girl with a Wineglass (fig. 10). In a broader sense it belongs to the category of elegant genre pieces, which were also produced by the hugely popular Willem van Mieris. Jacob Campo Weyerman described the duke’s visit to Van Mieris’s studio, where – following the example of Lothar Franz von Schönborn – he tried in vain to acquire a work by the artist. 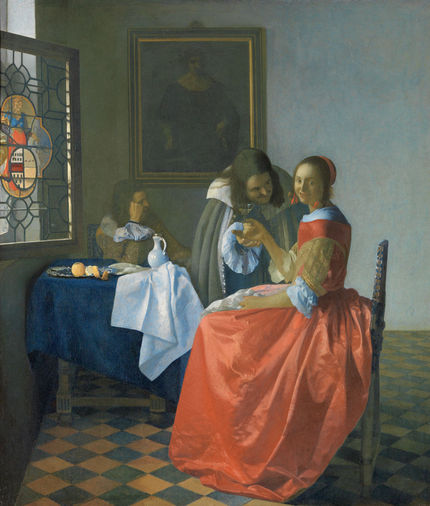 It was thanks to the duke’s visit to Arnold Houbraken that the collection was enriched with Jan Steen’s Marriage of Tobias and Sarah (fig. 11). Houbraken presented the painting as a visual example of the narrative style he recommended, which featured characters in theatrical poses, a concept that certainly appealed to the dramatist Anton Ulrich. 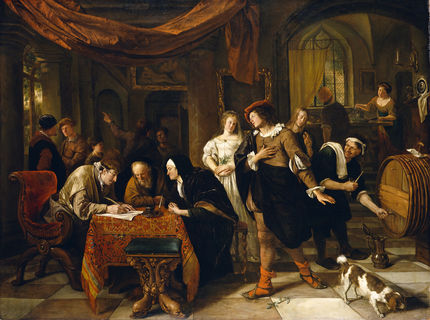 One of the most modern pictures in the duke’s collection was Gerard de Lairesse’s classicist painting Achilles Discovered among the Daughters of Lycomedes (fig. 12), which was probably acquired for him by Jan van Beuningen at the 1707 sale of the collection of Petronella de la Court. Another painting that appeared at this auction was Gerrit van Honthorst’s Soldier and a Girl, admittedly recorded at Salzdahlum only in 1737 but probably hanging there as early as 1707. The taste of the times is likewise reflected in the view of Ponte Rotto, an Italianate landscape in warm colors, painted by Jacob de Heusch in 1696 and taken directly to Salzdahlum.

The palace was also lent contemporary aristocratic flair by the elegant ladies’ portraits painted by Adriaen Hanneman, court painter in The Hague, whose works Anton Ulrich no doubt often encountered on his regular trips to the Netherlands from 1709 onward. After the marriage of his granddaughter Elisabeth Christine to Charles III of Habsburg, the later Holy Roman Emperor Charles VI – a highly important, late political success on the part of the duke – he attended the negotiations of the Spanish war of succession, at the same time taking advantage of this opportunity “to buy impressive works of art in Holland and Brabant,” as he himself wrote. In 1711 he even acquired the country seat “De Loo,” situated next to the stadholder’s palace in The Hague.

Anton Ulrich’s intense efforts in this period to acquire exceptional works of art are illustrated by his visit to Adriaen van der Werff in Rotterdam in 1709. He beseeched this court painter to Johann Wilhelm, Elector Palatine, to sell him one of his works. (Lothar Franz von Schönborn, August the Strong of Saxony and Prince Eugene of Savoy also succeeded in acquiring works by Van der Werff.) The painter let Anton Ulrich have a now-lost Mary Magdalene that he had allegedly painted for his wife. The duke immediately returned the compliment by presenting Van der Werff with a costly pocket watch, and, after returning home, he rewarded the painter handsomely by giving him his portrait, studded with ninety diamonds. The Mary Magdalene was hung in pride of place at Salzdahlum.

Anton Ulrich demonstrated the pleasure he derived from the Netherlandish sculpture of his day at least once, in 1701, when he commissioned Jan Blommendael, the portraitist of Stadholder Willem III, to make his portrait bust.

In 1713 the eighty-year-old duke, confined to a wheelchair, traveled to Amsterdam to attend Willem III’s estate sale in the company of Jan van Beuningen. This time he secured a Venetian masterpiece, Veronese’s Baptism of Christ, to enrich his holdings of Italian works. Anton Ulrich’s enthusiasm for art never waned: on his deathbed he begged his son August Wilhelm always to remember that he had “commended to his care a rare treasure trove of paintings.”

Silke Gatenbröcker is Chief Curator of Paintings at the Herzog Anton Ulrich-Museum in Braunschweig, Germany. She has been a member of CODART since 2006.