Present-day Poland is home to a significant number of Dutch, Flemish and Netherlandish drawings. The most important pieces are held at the National Museums in Gdańsk and Poznań, the Museum of the Princes Lubomirski, The National Ossolinski Institute (Muzeum Ksiazat Lubomirskich, Zakład Narodowy im. Ossolińskich)

in Wrocław, and the Princes Czartoryski Museum (Muzeum Czartoryski) and the Jagiellonian Library in Krakow, while the Warsaw University Library (Biblioteka Uniwersytecka w Warszawie) houses the royal collections of the last king of Poland, Stanisław II August (1732–1798) and Count Stanisław Kostka Potocki (1755–1821), as well as works from the Society of Friends of the Sciences. Compared with the aforementioned institutions, the collection of the Muzeum Narodowe w Warszawie (National Museum of Warsaw) is smaller and less representative, but nevertheless contains a number of interesting and important works, whose provenance and history provide the key to discussing the collection and explaining its nature.

The Muzeum Narodowe w Warszawie (MNW) was established in 1862 as the Museum of Fine Arts, which included a print room. In the first years of its existence, the institution focused on the acquisition and display of paintings. Prints and drawings were collected, but only modestly, and the collection depended almost entirely on bequests. One exception was the purchase of approximately one hundred Old Master drawings, including the Soldier Taking Out His Sword by Jan de Bray (1626-1697) from the collector Jan Jundziłł (1802–1878) in 1883. Dutch and Flemish drawings constituted only a fraction of the works donated to the museum in subsequent decades. In the highly valuable collection of Seweryn Smolikowski (1850–1920), for example, we find the Road through the Village by Adriaen van Stalbemt, and in the bequest of Aleksander Lesser (1814–1884), a Transfiguration by an unidentified artist active at the turn of the sixteenth century. Among the drawings donated by the Warsaw priest Józef Mrozowski (1864–1924), a Ship on Fire attributed to Ludolf Bakhuizen is worthy of mention. Notable purchases include the Baptism of Christ by Jan Thomas (van Yperen) and Portrait of a Girl by Wallerant Vaillant, which were acquired in August 1939 on the eve of the Second World War. 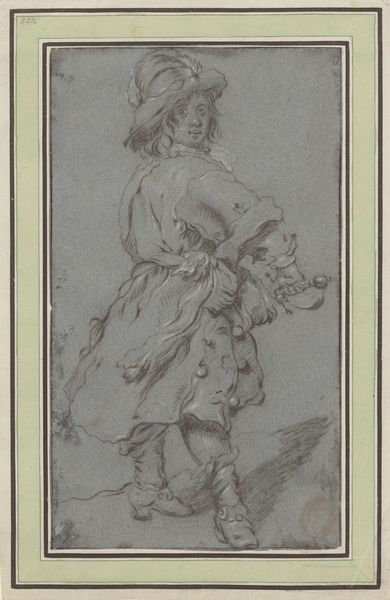 As the borders of Poland shifted in the post-war years, the collections in Vilnius and Lviv, among others, remained in the cut-off territories beyond the new eastern border. Only a few – such as the collection of the National Ossoliński Institute, established in 1817 in Lviv – were transferred to new places in Poland. Wrocław became its new seat after the war, but only a small part of the original collection was relocated there. On the other hand, new lands, such as Lower Silesia and Western Pomerania, now became part of Poland. Large numbers of artworks from those territories – mainly from Wrocław and Lower Silesia – were meant to compensate for the tremendous destruction inflicted by the Germans during the war. Hidden by Germans in repositories all over the region, these works of art were secured by Poles after the war; most of them were sent to Krakow and Warsaw, but some also went to newly established cultural institutions in Wrocław.

Among the art transferred to Warsaw was the extensive collection of drawings that had once belonged to Albrecht von Sebisch (1685–1748), a long-time mayor of Wrocław and later chairman of the city council. He had left his collection of drawings, prints and paintings to Ernst Wilhelm von Hubrig (1712–1787), who, in 1767, donated it to the city of Wrocław. It was at this time that the 1,133 drawings were mounted into two albums, Dessins Originaux. Pars I and Pars II, and deposited in the library of the Church of St. Mary Magdalene

in Wroclaw. They were relocated twice in the nineteenth century, first to the Municipal Library around 1853, and then to the Schlesisches Museum der bildenden Künste around 1880. Since 1945, they have been in the museum.

Among the sixteenth-century drawings from Sebisch’s collection, the most noteworthy include tapestry designs – Esther before Ahasuerus (ca. 1541–43) by Pieter Coecke van Aelst the Elder and Jacob Wrestling with an Angel by Nicolaas Orley – as well as designs for prints by Chrispijn van den Broeck and Maerten de Vos. 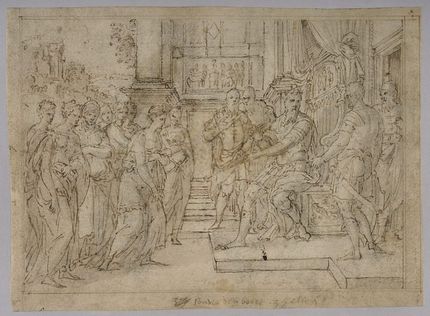 A group of landscapes from around 1600 by Philip van den Bossche, Frederik van Valckenborch, Peter Stevens the Younger and a follower of Anton Mirou represent some of the earlier seventeenth-century Flemish works, while later works worth mentioning include The Martyrdom of St. Barbara by Theodoor van Thulden, St. Peter Baptizing the Centurion by Jan Erasmus Quellinus and St. Christopher by Willem Panneels. The Panneels belongs to the same set as the so-called Rubens cantoor in Copenhagen. Religious drawings by Jan de Herdt, educated in Antwerp and active mostly in Moravia, represent the largest and most coherent group. The most important Flemish drawing of the group remains the recently rediscovered Joan of Arc, reattributed to Peter Paul Rubens. 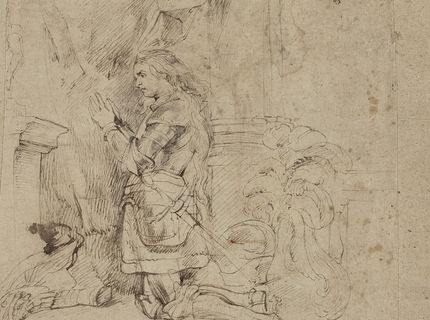 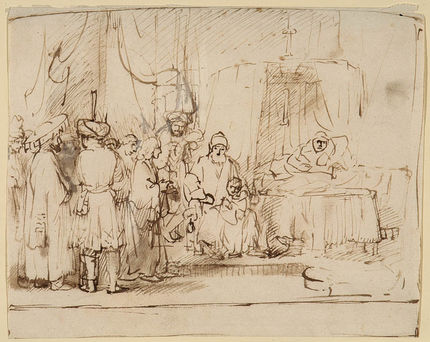 The group of seventeenth-century Dutch drawings is distinguished by two works by Jacques de Gheyn the Younger, which are preparatory studies for Willem Isaacsz van Swanenburg’s print The Land Yacht, Allegory of Summer by Gerard ter Borch the Elder, Agony in the Garden by Paulus van Vianen or Paulus Willemsz van Vianen, Samuel Appearing to Saul at the House of the Witch of Endor by Ferdinand Bol (?) and Joseph Telling His Dreams, attributed to Aert de Gelder. The most interesting set consists of almost seventy figure, landscape and animal studies associated with Cornelis Saftleven. It should be noted that many of the attributions of drawings from Sebisch’s collection that have been published in recent decades have not been upheld. 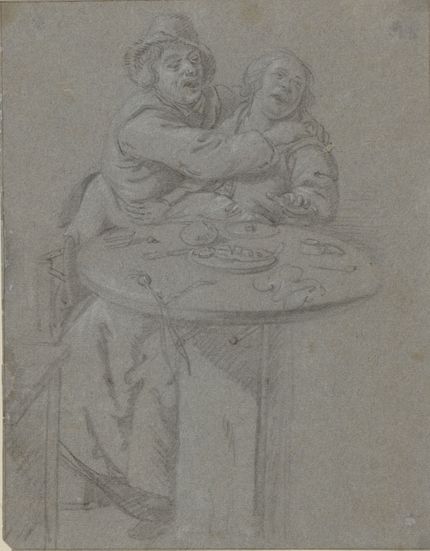 This was the case with drawings from the school of Rembrandt and with landscapes formerly attributed to Bartholomeus Breenbergh and Jan Asselijn.

In 1942 the possessions of the Zachęta Society for the Encouragement of the Fine Arts were incorporated into the museum’s holdings. The Zachęta Society was established in 1860 to support Polish artists, acquire works of art – with a particular focus on contemporary works – and educate

members of the society. The exhibitions it organized, boasting works by the most renowned Polish artists, attracted flocks of visitors. The Zachęta Society was remarkable in that it was driven by the needs of the nation, operating without the support of (and sometimes even contrary to) the Russian partitioning powers. In about 1900 it began to acquire older works, dating as far back as the Renaissance. The small number of works from the Zachęta collection that would interest CODART members include Couple Embracing at a Table by Jan Miense Molenaer, Adoration of the Magi by Jan Symonsz Pynas, Allegorical Figure by Mattheus Verheyden and Two Scholars in a Study by Michiel Versteegh.

A major highlight of the Zachęta collection is the group of European drawings assembled by the eminent Warsaw banker Jan Gottlieb Bloch (1836–1902) and donated to the Zachęta Society in 1903 by his widow, Emilia Bloch, née Kronenberg. The Bloch collection represents one of the most important Warsaw collections – if not the most important – of the late nineteenth century. Although its core is formed by nineteenth-century French drawings, a few Old Master drawings stand out: Lodewijk Toeput’s View of an Italian Villa, Abraham Bloemaert’s Moses and Aaron, Jan de Visscher’s Portrait of Bernardus Somer, Pieter Jansz Quast’s Three Marys and St. John the Evangelist at the Foot of the Cross, Melchior d’Hondecoeter’s Study of a Bird, Claes Moeyaert’s Bacchus and Ariadne on Naxos and Willem Schellinks’s View of an Italian Garden with a Fountain. 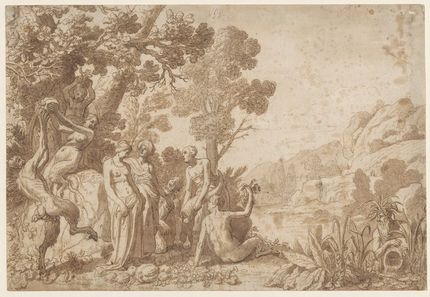 Designs for prints, including Gerard van Honthorst’s Old Woman Singing and Cornelis Dusart’s Allegory of Taste, are a feature of the collection.

After the war, only sporadic purchases were made to augment the collection of prints and drawings, the most notable acquisition being Peter van Lint’s Young Man Entering the Gate of Virtue. The Netherlandish, Dutch and Flemish drawings from the MNW collection have not yet been the subject of a separate monograph or critical catalogue. Until now they have received attention only in the broader context of Old Master drawings. Their present state of cataloguing is the remarkable achievement of post-war curators and employees of the Department of Prints and Drawings with a particular interest in the art of the Low

Countries: Maria Mrozińska, Anna Kozak and Maciej Monkiewicz. Recent research into attributions and provenances proves that the collection has much potential for discovery. A splendid example of this is the manuscript containing images of eminent persons and coats of arms of knights of the Order of the Golden Fleece, which, until recently, was associated with Nicolaas van der Horst, but now, as a result of research conducted by Joanna A. Tomicka in consultation with international experts, has been assigned an earlier date and is most likely by someone working in the circle of Maerten de Vos or Hans Bol. 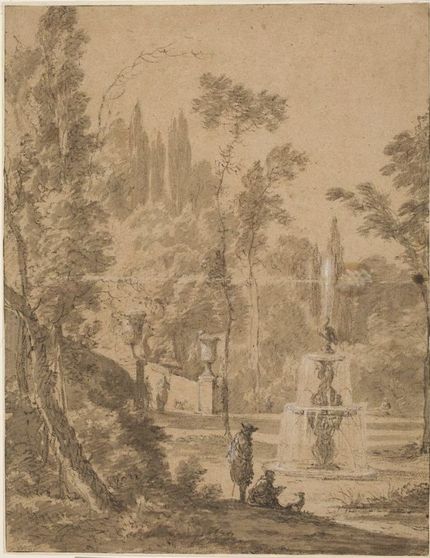 The drawings published thus far can be found, with images, on the MNW website (www.cyfrowe.mnw.art.pl). The most recent findings have appeared in the Journal of the National Museum in Warsaw (New Series)¸ among other publications.

Piotr Borusowski is assistant curator at the Muzeum Narodowe w Warszawie and chair of the Website Committee of CODART. He has been a member of CODART since 2009. 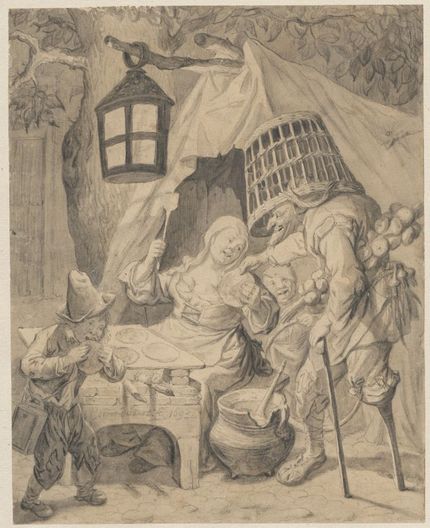