In the late 1630s Willem van de Velde the Elder established his studio in the flourishing city of Amsterdam, where art and culture took center stage. Economic prosperity in the Netherlands in the sixteenth and seventeenth centuries was inextricably linked to commerce and warfare at sea. 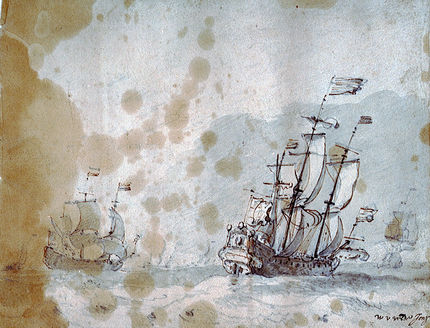 The Elder and his oldest son, Willem van de Velde the Younger, found a niche business dedicated exclusively to marine subjects. They produced for Dutch government officials and private clients purposeful official documents for battle and recreational pieces for bourgeois households. By the 1670s, with a reputation as the best marine artists of their time, they moved to London and entered the service of Charles II, who set them up with a generous monthly salary and a studio in the Queen’s House at Greenwich. For the Van de Veldes sketching was part of a lifelong career of depicting ship compositions and natural phenomena. Preliminary sketches show the thoroughness of their drawing methods, whether they were studying perspective by means of lines and dots connecting ships in a scene, writing notes to accompany a drawing, or concentrating on details in the rigging, sails, ship decorations, the positioning of ships and their behavior under different weather conditions. The Van de Veldes worked together for forty years and created a business that prospered for more than seven decades. Their studio business outlived them, extending into the eighteenth century and deeply influencing future generations of British artists, who would become avid collectors of their drawings.

The National Maritime Museum (NMM) has recently completed a project funded by the Esmée Fairbairn Foundation to study, conserve and preserve our vast collection of around 1,500 drawings by Willem van de Velde the Elder and the Younger. 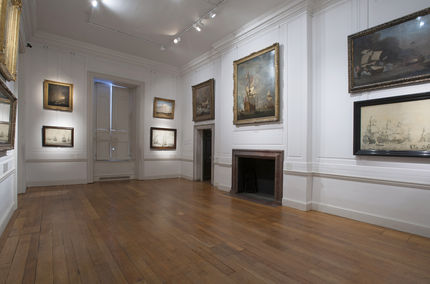 For more than three hundred years these drawings have been in the hands of private collectors and public institutions. Acquired by the Museum from the 1930s onwards from major European collections, these works boast illustrious provenances, including Sir Joshua Reynolds and Paul Sandby. Close examination enables us to unpick the layers of material history revealed by collectors’ inscriptions, stamps, backings and old additions. More recently, preservation decisions and conservation treatments have significantly altered the appearance and nature of the artworks. This valuable collection, the largest of its kind in the world, constitutes a mine of information on seventeenth-century materials and techniques. The findings, put in a larger context, could well redefine the interpretation of these works of art, informing a much-needed curatorial revaluation of the Van de Veldes as draughtsmen. 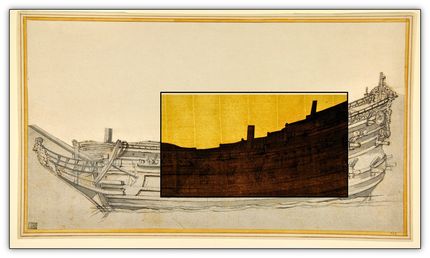 Thanks to the concerted efforts of staff members, contract conservators, volunteers and students, we have conserved around three hundred drawings by these artists, developed a long-term preservation plan for the NMM collection, and compiled important findings on materials and techniques. Researching and examining the collection has shed light on the present condition of the drawings. Although conservation treatments carried out in the second half of the twentieth century have often proved beneficial for the preservation of these drawings, certain interventions using inappropriate materials for repair or deacidification have, over time, altered the nature of some of the supports and media.

Today cultural institutions in the UK and the rest of Europe are increasingly faced with financial constraints that lead to staff reductions and dwindling resources. External fundraising for this project proved feasible and enabled us to address long-term collections care in which specialized

conservators worked alongside permanent staff, thus allowing us to focus on a valuable part of our Prints & Drawings Collection. Furthermore, the Van de Velde conservation project was supported by the NMM’s public program. We created an opportunity to share our findings with other museum professionals and the wider public by holding a one-day seminar and a Van de Velde conservation display (September 2013-February 2014) at the Queen’s House, the historic site that houses our art collection. We also relied on an external advisory group of curatorial, scientific and conservation experts, who advised us in matters of conservation treatment and analysis, preservation and housing, and art-technical and historical research. Not only their advice, but also the networking links they provided in the course of this project helped to ensure the quality of the outcome. 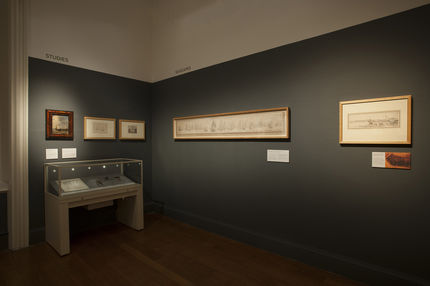 The detailed conservation survey carried out as part of the project took nearly six months, during which time conservators and students examined each drawing and recorded all relevant information, which is now available on our NMM integrated museum database as a reference for conservators and curators. Prior to this project, the technical description of supports, media, mounting and housing methods had not always been sufficiently accurate or readily available. Centralizing the information was a key part of the project, since this collection is in great demand for in-house exhibitions and outgoing loans, and is frequently consulted by scholars in our reading rooms. The Van de Veldes were incredibly prolific draughtsmen, and large numbers of the surviving drawings are preserved in other major UK and international institutions. Comparative research of other Van de Velde drawings at the British Museum, the Victoria & Albert Museum, the Courtauld Institute of Art, the Rijksmuseum and Museum Boijmans Van Beuningen enabled us to complement the information gathered from our survey and to understand how differences in the history of collecting and conserving can affect their current condition.

The drawing methods used by the Van de Veldes hold the key to a unique intellectual and creative process, inseparably linked to their particular use of a limited range of drawing materials. Fortunately, we were able to rely on the services volunteered by two experienced photographers, 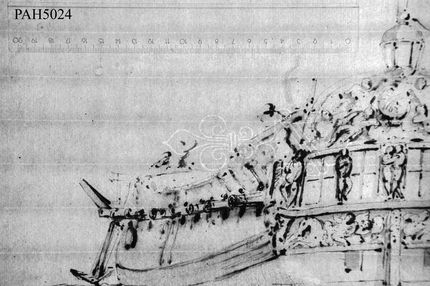 which enabled us to make a visual record of the technical details of the collection of Van de Velde drawings. In addition to obtaining ambient, raking and transmitted light images, the photographers took ultraviolet and infrared images of the works. They continue to record the watermarks in the sheets used by the Van de Veldes, expanding on Michael Robinson’s earlier tracings of the symbols.

The Van de Veldes mostly drew on Dutch and French handmade papers of exceptional quality, which gives some indication of their comfortable circumstances and artistic status. Long portable rolls of paper – consisting of sheets pasted together to make a landscape format – were the ideal support for sketches of battles witnessed at sea, which were then copied or worked up in the studio. The Van de Veldes often corrected elements in the original designs by pasting pieces of paper onto their drawings or cutting out areas

which were then incorporated in new drawings. Rimpastare, joining paper, originated in the Renaissance to assemble cartoons, a method Vasari described thus: “Sheets of paper, I mean square sheets, are fastened together with paste of flour and water cooked on the fire.” Spot-testing and UV-imaging carried out during the project verified that pasting papers with starch was the Van de Veldes’ method of choice. This information helped us to distinguish these joins from later paper additions, which collectors and artists pasted on with different adhesives. 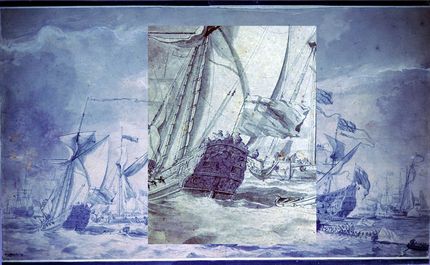 British artists’ fascination with the Van de Veldes can often be traced through alterations to the media. Charles Gore, an eighteenth-century amateur artist, collected drawings by the Van de Veldes and practiced his early drawing technique on them before attempting to make drawings of his own. Visual examination helped us to distinguish the differences in media and technique of the ink outlines added by Gore. Other additions – such as a thick lead white impasto, possibly made by the collector and marine painter Dominic Serres (1722-1793) over a damaged drawing by Van de Velde the Younger – are clearly distinguishable with UV photography.

To make outlines the Van de Veldes preferred graphite, which was rarely used as a drawing material in the seventeenth century. This fact is often omitted – or the material itself misidentified – in art-historical publications on these artists. Before the invention of the ground graphite pencil, which was commercialized later in the eighteenth century, the Van de Veldes used graphite in its pure form for outlining compositions. Raman spectroscopy carried out by Janet Ambers on NMM drawings in the scientific department of the British Museum verified that the Van de Veldes used graphite in their drawings rather than chalk, the latter being much more common in the seventeenth century. Graphite is impermeable, very precise and ideal for transfer. The Van de Veldes used the offset method extensively as a means of transfer from drawing to drawing, which enabled them to speed up the working process and copy compositions they wished to modify. 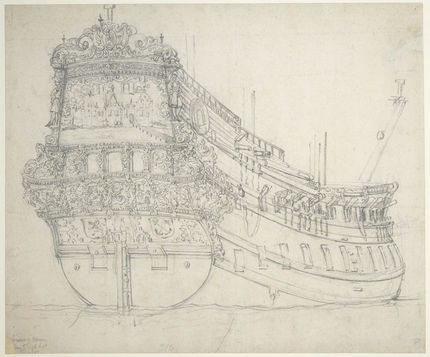 Three hundred drawings underwent conservation treatment ranging from minor interventions – such as improving the primary housing and mounting conditions of individual drawings – to more complex treatment aimed at reducing severe structural damage or chemical degradation. It must be noted that, generally speaking, the full conservation treatments carried out on some of these drawings have, over time, compromised the integrity of the supports. For example, by washing, flattening or lining a drawing, the burnishing marks on the verso left by offset transfer methods were sometimes unintentionally removed. A few decades ago, the degradation of iron-gall ink justified the 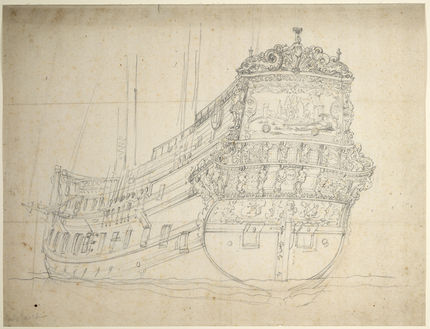 removal (and often disposal) of historical backings in order to perform deacidification treatments. Conservation research, which has contributed to our understanding of these drawings, has demonstrated the importance of preserving all relevant historical evidence, and this in turn has prompted a less invasive and more visually sympathetic approach to conservation treatment. We have prioritized conservation and mounting solutions that can be adapted to our storage facilities yet guarantee the long-term preservation of our collection. This careful approach has even extended to preserving Colnaghi mounts from the 1950s, which are closely linked to the formation and cataloguing of the NMM collection and the history of our museum.

An important concern during this project was the damage caused by light to the collection of Van de Velde drawings. To reach a more informed decision on the fading rate of our drawings, Dr. Jacob Thomas, science adviser to the Van de Velde project, used a recently developed microfadeometer to measure the lightfastness of the drawing materials. On the whole, the graphite, carbon black inks and handmade papers were less susceptible to exposure to light than other, more modern art materials, but the iron-gall inks used by the Van de Veldes in their drawings must be closely monitored, especially when on display.

Thanks to the Esmée Fairbairn grant and generous contributions from a large network of museum professionals, the project has been brought to a successful conclusion. In future we hope that our findings, including the information compiled on the materials and techniques used in seventeenth-century marine art, will open up new avenues of research and cross-disciplinary collaboration that will feed into a much-needed curatorial revision of the literature on the Van de Veldes and their legacy as draughtsmen. The staff at Royal Museums Greenwich look forward to welcoming you to the upcoming CODART Achttien conference in January 2015, “Curators and the Art Trade: A Discussion of Opportunities and Dilemmas,” which includes an optional visit to the Queen’s House that will feature some of the Van de Veldes’ drawings treated during this project. 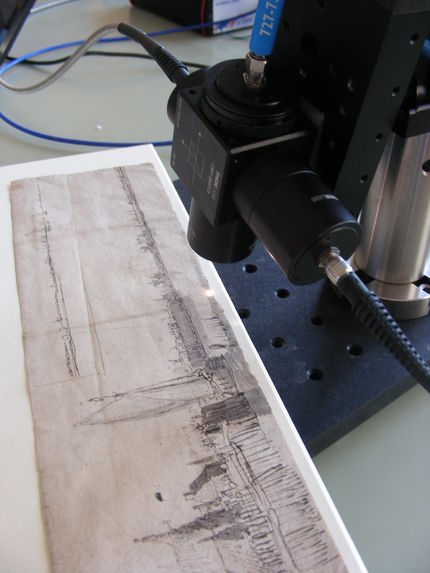