Architectural Drawings from the Low Countries in Belgian Collections: Fifteenth to Sixteenth Centuries

In an often-quoted passage from his Lives of the Most Eminent Painters, Sculptors, and Architects, Giorgio Vasari describes drawing as the Father of all three arts. Vasari was well aware of the double meaning of the term disegno, referring both to the practice of drawing and to the intellectual design process. Although architectural drawings have attracted some scholarly interest from architectural

historians, relatively few studies in the Netherlands are devoted to the tradition of architectural drawing as compared to drawings in the other two areas of the Vasarian triad.1

The first attempts to systematically preserve and archive architectural designs were not made until the seventeenth century, when municipal and other local authorities in the Dutch Republic saw value in retaining these works for posterity. Before that time, very few Netherlandish architectural drawings from the fifteenth and sixteenth centuries had been preserved after the intended edifice was built – possibly owing to a belief that the drawings had already served their purpose. In Italy, by contrast, far more architectural drawings have been preserved. The designers of major Italian building projects, such as Michelangelo, Raphael and Bramante, were already recognized as great

artists in their time, and their drawings and sketches had a greater chance of survival as a result. A different attitude towards preservation was also evident in the German and Austrian Bauhütte, where the majority of gothic architectural drawings, both elevations and geometrical ground plans, were preserved in church and episcopal archives on site. The Akademie der Bildende Kunst in Vienna still holds 428 gothic drawings, most of which are related to the design of St. Stephen’s Cathedral in that city and its interior sculptural and micro-architectural program. Compared to these collections, the number of extant Early Modern architectural drawings in the Low Countries is only meager.

A drawing on parchment of the belfry tower in Ghent, datable to between 1314 and 1323 and kept in the city’s STAM Museum, is the oldest known Netherlandish architectural drawing (fig. 1). This unattributed sheet shows an early design for the belfry tower, which was altered during the building process, and most likely functioned as a presentation drawing. 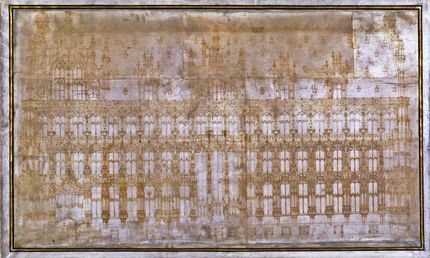 Presentation drawings such as this one often served multiple goals. First, they could be used as working drawings on the actual building site. Although the drawing was made without what would become traditional measuring tools, its proportions were geometrically rendered according to ad quadratum methods. Second, and most significantly, this drawing served to inform the Ghent city officials of the proposed design and thus functioned as a vidimus drawing.2 The draftsman included many figurative details such as gargoyles and a painted frieze on the fourth level, which were non-essential for the technical process but engaging for those who had commissioned the project. A third goal would have been to inform the citizens of Ghent about the upcoming project. The inscription at the bottom of the drawing, stating that this is the design for the belfry (‘dbweerp van den belfroete’) seems to point towards this more public audience.  Drawings of this kind were often displayed to raise funds for the project.

Contemporaneous with the Ghent town hall drawings is an elevation drawing attributed to Joos II (or Josse) Metsys, brother of the famous Antwerp painter Quinten Metsys, which is now in the collection of Museum M in Leuven (fig 3). The drawing (c. 1505-1525), executed in brown ink on parchment, shows an unrealized design for the west tower complex of St. Peter’s Church in Leuven on five large pieces of parchment, measuring 276 cm in total. It is the only well-preserved Netherlandish gothic design drawing able to rival German elevation plans of this period. For this plan, Metsys based himself on an earlier drawing made in 1481

by the Leuven architect Gillis Stuerbout, perhaps in collaboration with his brother, the painter Hubert Stuerbout (also in the collection of museum M, though badly damaged). Metsys’s plan applies the same measurements but provides a stylistic update of the earlier plan, by adding more flamboyant octagonal gothic towers, in keeping with contemporary architectural projects such as the Antwerp Church of Our Lady or the intended spire of the Church of St. Rumbold in Mechelen. Ornamental details such as the tracery and balconies are quite often added only to one half of the architectural drawing, since the other half can be mirrored. Here, however, the full and equal ornamental representation on both sides of the drawing indicate that this drawing also functioned largely as a showpiece for those who had commissioned the design and possibly for a wider audience.

In addition, this large parchment drawing provided the basis for one of the only extant sculpted architectural models known to have been created as part of a planning process. Studies of building contracts have shown that the use of models for an architectural or large sculptural projects was rather common practice, at least from the fifteenth century onwards. Most of these models were constructed in wood, however, and have not been preserved. In 1524 Leuven city council concluded a contract with Joos Metsys for the construction of a stone model for the upper three floors of the west tower. Since Metsys was advanced in years, the actual execution of the model in precious Avesnes stone was left to his son-in-law, Jan Beyaert. In contrast to the drawing, the 8.27-meter high model includes only the middle 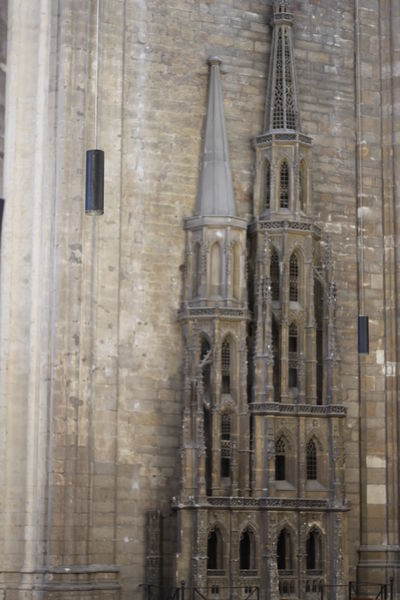 and north towers, since the south tower would have been identical. Combined with the elevation drawing, the viewer would have had sufficient information to complete the mental picture. The model was to be delivered to Leuven town hall, probably for the public to witness and marvel at the building

project. Had it been completed, the building would have soared to a full 175 meters, making it almost 30 meters higher than Strasbourg cathedral and hence the tallest building in Europe.

In sixteenth-century contracts the term metselrye not only encompassed architecture, but also sculpture and what is known today as “micro” architecture. One of the most striking examples in this category is the design for one of the major projects of the early Renaissance in the Low Countries: the rood screen of the collegiate church of St. Waudru in Mons. Although the building itself was demolished at the end of the eighteenth century, the design is still best understood through the original architectural drawing, dated 1535 and today preserved in the archives of Mons (fig. 4). Mary of Hungary’s favorite sculptor and architect, Jacques Du Broeucq, was contracted to supply most of the sculptural work, including the high relief elements and the free-standing statues of the Virtues. Although the micro-architectural framework and the drawing have been attributed to the same artist, this attribution remains disputable. The design depicts the rood screen with three large barrel vaults, executed wholly in the antique style, akin to the architectural ornamental style of Jean Mone, who also worked in the Habsburgs’ courtly circles. Interestingly, the sculptures of the Virtues seem to have been drawn by a different hand; space is left for them in the architectural design. They may have been included by Du Broeucq. Minor differences between the drawing’s right and left halves point to its use as a preliminary design, offering the chapter of St. Waudru different options before execution. 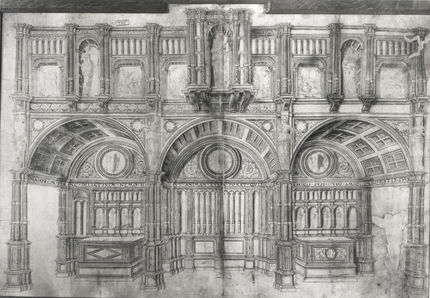 Since most of the architectural drawings to have survived are presentation drawings, they give a distorted image of the output of practical working drawings. They were often not executed by artists but rather drawn by city engineers or land surveyors. Despite their lack of aesthetic appeal, they can often provide us with additional art historical data. A well-known case is the ground plan of the house of the famous Antwerp publisher and printmaker Hieronymus Cock, which belongs to the Antwerp City Archives. The ground plan of Antwerp’s most prolific print enterprise, Aux Quatre Vents, was executed in March 1573, three years after Cock’s death (fig 5). Since the exact measurements are indicated in Antwerp feet, the drawing gives us an indication of the actual and – surprisingly small – size of the print shop and publishing house.

Scholarship on the architectural drawing practice in the Low Countries is still in its early phase, and should by no means

be restricted as a field of architectural history. Architectural design exceeds the boundaries between different crafts, so meticulously guarded by guild organizations. Especially during the sixteenth century, designing practice becomes a shared responsibility of master builders, sculptors, goldsmiths, engravers and painters alike. This might be best illustrated by the 1549 introduction to Pieter Coecke van Aelst’s Vitruvian booklet, ‘Die inventie der Colommen’, which he addresses to all painters, sculptors, stonecutters and all who derive pleasure from antique edifices. 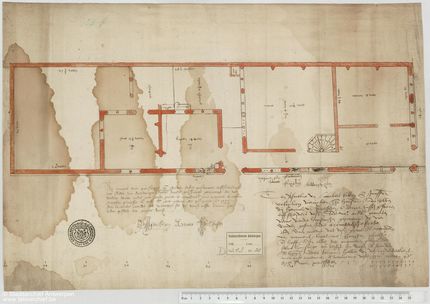 Oliver Kik is currently completing his doctoral dissertation "Between the Lines" at the universities of Leuven and Utrecht, on the architectural design process in the Low Countries between 1480 and 1560.