The question of place is a common theme in studies of Netherlandish art. One reason for this is the wealth of landscape subjects in Early Modern paintings, prints, and drawings. Another is the abiding interest in drawing geographical distinctions: that is, between schools linked to particular cities (Haarlem, Dordrecht, Brussels) or regions (Dutch versus Flemish). By contrast, the subject of space—its design and its decoration—attracts far less attention within our field. The content of the present issue is therefore a very welcome corrective, and will undoubtedly spark further reflections on subjects relating to Dutch and

Flemish architecture and design. Oliver Kik draws our attention to a number of important architectural drawings. The examples he provides compel us to ask why such drawings have not been treated in the past as especially worthy of preservation or scholarly scrutiny. Clearly, we can learn a great deal from them, both about the ways in which major buildings were commissioned and about the processes of design and construction.

The interview with Judikje Kiers and Thijs Boers shows that focusing on historic sites may guide and indeed transform museum policy. The premise that the building in which Ons’ Lieve Heer op Solder is located is itself the most important object in the museum’s collection leads to a radically different approach: the historic site is no longer viewed as a mere backdrop but recast as experience. My colleagues at 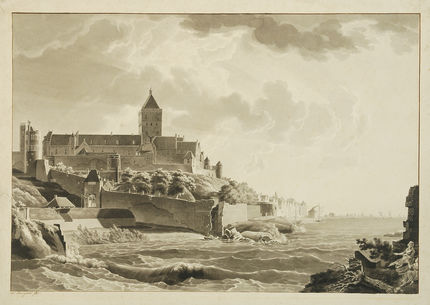 the Art Institute pursued this strategy in the recent exhibition Van Gogh’s Bedrooms, which included a recreation of the space depicted in the artist’s paintings of his bedroom in the “Yellow House” in Arles.

Yvette Driever reflects on the reconstruction of a historic site from a different angle. The Valkhof Citadel in Nijmegen was immortalized in a series of drawings produced by the artist and politician Hendrik Hoogers at the end of the eighteenth century shortly before the structure was demolished. These drawings added to what was already an abundance of paintings, prints, and drawings prominently featuring the citadel - by Jan van Goyen, Aelbert Cuyp, and others. Plans were already being drawn up for the citadel’s

reconstruction around 1900. Still, even though recent years have witnessed an upsurge of interest in this idea, no progress has been made in reconstructing part or all of the structure. The Museum Het Valkhof therefore remains a historic site that preserves the memory of a space rather than providing access to it.

Piotr Oczko and Jan Pluis offer a rare glimpse of the use of Dutch tiles in Poland, which not only shows the decorative arts functioning in their intended spaces but also demonstrates the popularity of this art form beyond the Low Countries. This brief survey is a preview of their forthcoming book.

Taken together, these texts suggest avenues for further research while at the same time inviting us to aspire to a more three-dimensional mindset, even when interpreting two-dimensional objects.

Victoria Sancho Lobis is Prince Trust Curator of Prints and Drawings at the Art Institute of Chicago. She has been a member of CODART since 2009.