Fit for a King

Back from Poland after a very successful CODART TWINTIG congress, I continue to reflect on the many impressions I brought home with me. Most memorable are always the encounters with our members, who flocked to Warsaw from the remote corners of the world to meet with one another. Every year it’s a privilege to talk with them about their new publications and exhibitions, and the role our network plays in the realization of their projects. This year we were also able to offer a number of exceptionally interesting excursions, in addition to compelling lectures, stimulating statements, and the short but powerful contributions made in the Speakers’ Corner. In Warsaw, we undertook several in-depth visits to the museums that were

our partners this year: the National Museum in Warsaw, the Royal Palace, the Printroom of the University of Warsaw and the Royal Łazienki Palace. An account of the last-mentioned visit is included in this eZine. There were also a couple of spectacular excursions to Cracow. Surely one of the high points of our days in Poland was climbing the scaffolding behind the thirteen-meter-tall Veit Stoss Altarpiece in St. Mary’s Basilica, which enabled us to stand face to face with the fifteenth-century figures that are otherwise barely visible from down below.

In addition to all the Dutch and Flemish art we saw in Warsaw and Cracow, there was also time to see pictures that originated in Poland. The court painter Marcello Bacciarelli made many portraits of the last Polish king, Stanisław August Poniatowski. One of his most flamboyant state portraits hangs in the Royal Palace in Warsaw, where the

opening of the CODART TWINTIG congress took place and where we gathered for the Speakers’ Corner. Bacciarelli did his utmost to portray His Majesty in all his glory. The monarch wears an ermine-lined cloak decorated with golden eagles, a silver-colored jacket with gold embroidery, and knee breeches with matching hose and shoes. On his breast gleams the diamond-studded chain and cross of the Polish Order of the White Eagle; in his right hand he holds a ceremonial sword, its hilt shaped like an eagle’s head. Next to him, the state insignias lie on a red velvet cushion. His attire was made by his own tailor, Christian Lange, possibly to the king’s own designs. Stanisław August was extremely pleased with the portrait and had a number of copies made to give away as gifts.

“As far as my appearance is concerned, I find that the portrait Bacciarelli painted of me in my coronation costume is the best likeness,” he later observed in his Memoires. “I would be satisfied with my figure if only I were one cal (ca. 2.5 cm, or 1 inch) taller, if my legs were better shaped, my nose less aquiline, my hips narrower, my gaze sharper, and my teeth slightly larger.” In spite of these shortcomings, the king still thought he cut a noble figure. Indeed, his whole body language radiates so much distinction that he succeeds in becoming the majestic focus of attention.

Bacciarelli and Stanisław August became good friends. The Italian was not only a confidant of the king, but also his most important advisor when it came to assembling his art collection, many pieces of which we were able to see in Warsaw. Bacciarelli continued to portray his patron until 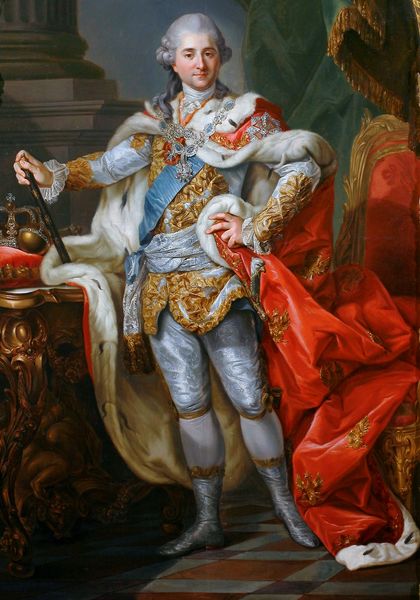 1793, the year in which the Second Partition of Poland put an end to the Polish-Lithuanian Commonwealth and two years before the king was forced to flee to Russia, where he spent the last years of his life.

Dating from that year of disaster, 1793, is the most enigmatic portrait that Bacciarelli painted of the king, a work that now hangs in the National Museum in Warsaw. It differs in every way from the glorious portrait the court painter had made of his friend and patron some thirty years earlier, shortly after his accession to the throne. In this later portrait, Stanisław August sits at a desk, wearing a sky-blue, fur-lined cloak over a lace blouse. Bacciarelli did not conceal the fact that the king had aged by many years. His hair is whiter, his lips thinner, his look much less resolute. His crown lies on the desk; a globe stands behind him. His right hand rests on an hourglass, a symbol of Freemasonry; his left hand, with the royal signet ring on the little finger, rests on some papers, no doubt official documents of some kind. Never before had anyone portrayed the king looking so vulnerable. If there is one thing that is clear from these portraits, it is this: clothes make the man.

What significance does clothing have in paintings? How did artists present the latest fabrics and fashions in their artworks? What role does fashion play in our museum collections, and how should we display such coronation costumes, lace collars and pieces of armor to the public? I am proud to present you with this unusual issue of our eZine, which, for a change, is not about paintings, prints or drawings, but focuses instead on a particular sector of the applied arts. I wish you much reading pleasure. And please make a note of the next congress: CODART 21 in Bruges, 11-13 March 2018. Save the date! 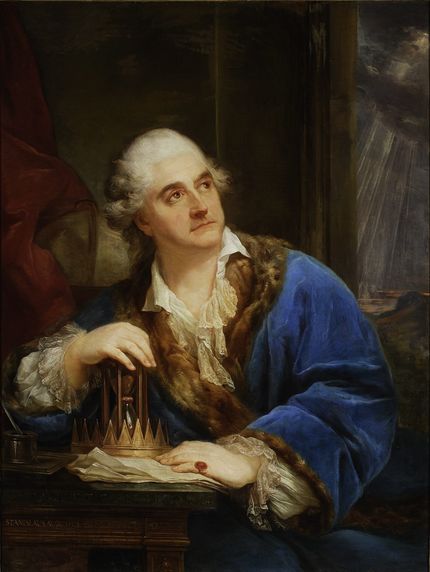