Hidden Gems by 5 Curators, part I

An Explosive Struggle in the Prado

Rubens’s Hercules and Cerberus from 1636-37 is a small picture (28 x 31.6 cm) bursting with formal power. The sense of compressed energy is palpable – handling the painting at the Prado feels like holding an explosive.

We usually think of Rubens as an artist who favoured large-scale work, but approximately one third of his paintings are small. Most of them are sketches, as is the case here. This type of picture, made in preparation for a larger work, offers us visible traces of the creative process, and a sense

of privileged access. In Hercules and Cerberus, the brown tone of the oak support glows through the overlapping translucent layers. Two lines drawn in black mark two axes of the composition: one runs through the head of Hercules, the other, to the left, through the head of one of the Furies and the hindquarters of the three-headed dog. Strokes of paint pile over each other as traces of the painter’s evolving thoughts.

In spite of the dazzling show of craftsmanship, the painting is not boastful. The perfect fusion of content and form is characteristic of Rubens, and key to understanding his art. His goal is to activate empathy, to make us feel the emotions involved in the stories that he paints as if they were lived experience. Virginia Woolf, talking about her writing, once explained that words lead people to think and feel, 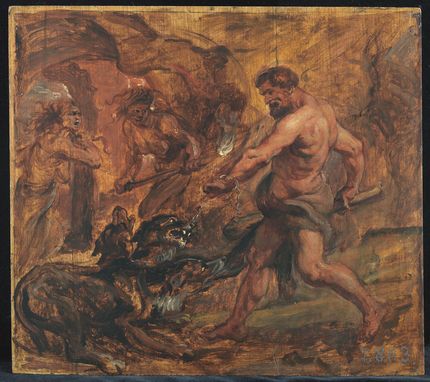 but ‘to think and to feel not about them, but about something different’ (in the BBC radio recording Craftsmanship, 1937). Rubens shares this approach to art-making. His painterly skills, the qualities and powers that he brings to bear in his art, are never self-serving.

Hercules and Cerberus illustrates an episode from Ovid’s Metamorphoses (VII, 409-419): ‘There is a dark cavern with a gaping mouth, and a path into the depths, up which Hercules, hero of Tiryns, dragged the dog, tied with steel chains, resisting and twisting its eyes away from the daylight and the shining rays’. Rubens’s telling of the story in this sketch exemplifies how he translates meaning into form.

The impressions left by the vigorous strokes of the brush over the surface animate the scene. Dynamic forms and lines create an impression of ebb and flow, pulling us into the contest of strength taking place before the gates of Hell. Because of how they are characterised, the figures appear as if engaged in an exalted moment, yet they also seem close and real, as if directly witnessed. Rubens makes the struggle between the youthful hero and the forces of the underworld feel as an event where great things are at stake.

Dr. Alejandro Vergara is Senior Curator of Flemish and Northern European Paintings at the Museo Nacional del Prado in Madrid. He has been a member of CODART since 1999. 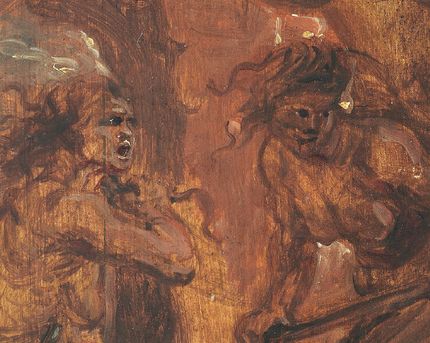 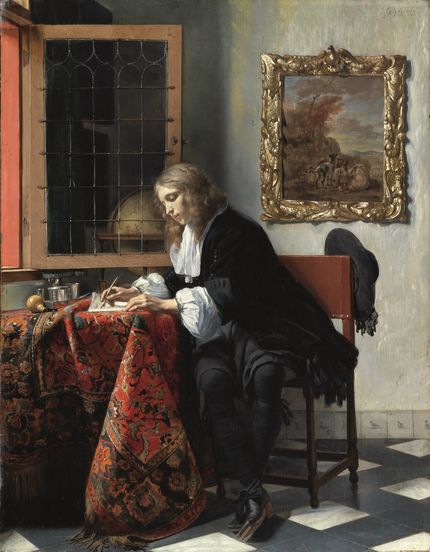 ‘Oh … I thought they were by Vermeer!’ This comment is frequently expressed by visitors to the National Gallery of Ireland upon seeing the wall text next to Gabriel Metsu’s Man Writing a Letter and Woman Reading a Letter. Personally, I do not blame people for misidentifying the artist of these pendants, as they look more

Vermeer-like than any other work by contemporary artists. In fact, I have sometimes wondered myself whether Metsu deliberately painted works that might be mistaken for Vermeer’s.

The celebrated companion pieces have fascinated me ever since I started my Ph.D. dissertation on Metsu’s work in 1999. Five years later, I was fortunate to take up a curatorial position at the museum that owns these works. Seeing them on a daily basis gave me ample opportunity to ponder what Metsu tried to achieve. It became clear to me that he combined several of what he considered to be signature elements of Vermeer’s repertoire, including the division of the composition in geometrical shapes, the shallow interior, the checkered marble-tiled floor, and the natural daylight reflecting off a white plastered back wall. Metsu even painted some of Vermeer’s typical pointillés on the lady’s shoe in the foreground. Towards the end of the painting process, he made one change that encapsulates his strategy: he changed the colour of the lady’s jacket from red (his favourite colour of such garments in the mid-1660s) to bright yellow. By doing so, Metsu replicated what he saw as a trademark of Vermeer’s work.

As I kept looking at the pendants, I realised however that Metsu did not copy or imitate, but merely approached Vermeer’s style: his colouring is brighter, his natural light has fewer tonal values and his spatial relations are poorly defined; moreover, Metsu’s superb brushwork aimed at carefully describing textures and surfaces bears little 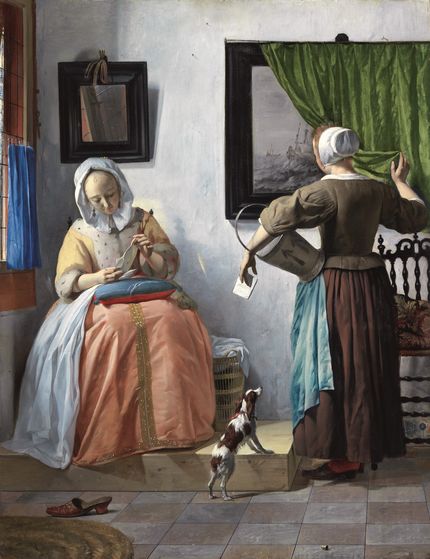 relationship to Vermeer’s work. Furthermore, I should admit that after all these years I still cannot identify with certainty which of Vermeer’s individual paintings served as direct sources of inspiration to Metsu. He certainly did not study Vermeer’s Astronomer, now in the Louvre, in preparation of Man Writing a Letter, and The Love Letter, currently at the Rijksmuseum, to arrive at Woman Reading a Letter,

as scholars have argued in the past. True, Metsu’s and Vermeer’s two pensive men seated at a carpeted table near a window and a globe look very much alike; and both other paintings depict ladies in fur-trimmed jackets, seated next to a sewing basket, having received letters from a maid standing in front of a marine painting. These similarities are hardly coincidental. Yet, Metsu completed the works two to four years before Vermeer finished his. It is far more likely that the Delft artist saw Metsu’s pendants, which, although inspired by his own earlier works, provided him with ideas that he had not previously explored. Intriguing as this scenario may sound, I am afraid we are still a long time away from museum visitors in Paris and Amsterdam mistaking Vermeer’s Astronomer and Love-Letter for works by Metsu…

Dr. Adriaan E. Waiboer is Head of Collections and Research at the National Gallery of Ireland in Dublin. He has been a member of CODART since 1999.

An Enigmatic Laugh in Cologne

Oh, that laugh! No less mysterious than the secretive smile of the Mona Lisa, it has preoccupied art historians for decades and never fails to fascinate the viewer. Rembrandt’s self-portrait is one of the best-known paintings in the Wallraf-Richartz-Museum in Cologne. And at the same time it is one of the most enigmatic. I return to it again and again, wondering, marvelling, admiring.

Another Cologne icon, the contemporary artist Gerhard Richter, once said: 'To me, pictures which I understand, are bad.1 That explains, conversely, my fascination. In a masterly way, Rembrandt does not make it easy for us to understand his work.

How should we interpret the old man, portrayed with such humility, who stands out brightly against the darkness? Is the artist striving for that ‘one’ interpretation anyway? Is Rembrandt alluding to the philosopher Democritus laughing at the world? Is he depicting himself cynically scorning death? Or, mahlstick in hand, does he step into the role of the classical painter Zeuxis, who notoriously laughed himself to death painting the portrait of an ugly old woman? Could she be the grotesque profile on the left-hand edge of the picture?2

On closer inspection the comedy is also art historical drama, because that forthright laugh, like the raised eyebrows, was the result of overpainting. 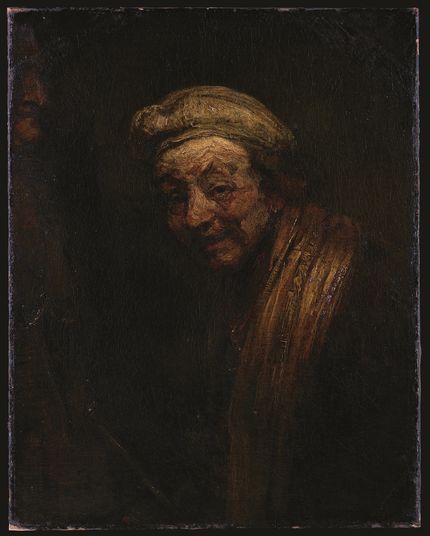 Many comprehensive technological studies have been carried out, yielding numerous discoveries regarding the possible original state of the painting and its current precarious condition, which further lessens its readability.3

The indiscernibility, the ‘great blackness’ that dominates many of Rembrandt’s works, ‘because one must often do without three-quarters of a work for a stirring

section gleaming with light,4 already irritated the connoisseur Gerhard Morell in 1767. No, Rembrandt was never easy to digest. His grasp of painting, the virtuoso mountain of layers that unite to form an ecstasy of brown and gold tones, challenges the viewer. The comparison of his art, in a play in 1648,5 with haptically gleaming gold embroidery is apposite. Nonetheless, in Rembrandt’s work it is the grand gesture rather than painstaking handwork that dominates, that conceals his art – real dissimulatio artis. John Elsum describes it congenially in 1704 in his epigram to ‘an Old Man’s head, by Rembrant’:‘What a coarse rugged Way of Painting’s here, / Stroake upon Stroake, Dabbs upon Dabbs appear. / The Work you’d think was huddled up in haste, / But mark how truly ev’ry Colour’s plac’d, / With such Oeconomy in such a sort, / That they each other mutually support. / Rembrant! Thy Pencil plays a subtil Part / This Roughness is contriv’d to hide thy Art.’6 With laughter in my eyes, I draw on this wonderful ekphrasis for the old man of Cologne.

Dr. Anja Sevčík, Head of Department of Baroque Painting at the Wallraf-Richartz-Museum & Fondation Corboud in Cologne. She has been a member of CODART since 1999.

These texts were published in The Low Countries. Arts and Society in Flanders and the Netherlands, Antwerp, 2018 and are reproduced by the courtesy of TLC.