A Miniature Netherlandish Treasure in Detroit

Among the many treasures in the encyclopaedic collection of the Detroit Institute of Arts is a miniature Netherlandish altarpiece deftly executed in boxwood – a hardwood favoured by carvers for its fine grain and remarkable density. Measuring no more than nine inches high, the altarpiece comprises three principal components: a triptych body, a circular winged predella, and an openwork tracery foot. The altarpiece’s exterior is exceedingly plain.

It hardly prepares the viewer for the hypertechnical virtuosity of a world rendered in miniature that waits inside.

When the triptych wings are open, one finds a central scene of the Nativity combined with the Annunciation to the Shepherds. The Nativity is prominently depicted in the lower half, in the foreground, and the Annunciation to the Shepherds in the upper half, but in the background and on a slightly smaller scale. The brick ruins help to separate as well as to connect the two chronologically distinct episodes. This spatial arrangement contributes to the remarkable illusion of pictorial depth in an otherwise shallow space that measures no more than an inch deep. The interior of the left wing bears the Annunciation and that of the right, the Presentation in the Temple. Both are carved in very low relief. In the predella below is an Adoration of the Magi that

displays many compositional similarities to the Nativity.

The first half of Matthew 2:6 is inscribed along the bottom edge of the triptych body: ET TV BETHLE[hem] / TERRA•IV[da] NEQVAQVAM MIN[im]A / ES I[n] PRI[n]CIPIB[u]S (But you, Bethlehem, in the land of Judah, are by no means least among the rulers of Judah). The words appear cramped towards the end of the inscription, with some of the letters carved into the moulding. This suggests that the sculptor might not have planned accordingly. I find this endearing, for it is the plight of the sculptor to carry on, knowing that such oversights cannot be reversed in the art of the carving.

This altarpiece exemplifies the late medieval tradition of microscopic boxwood carving for which the Duchy of Brabant served as a major centre of production. Having written my dissertation on another popular Brabantine carved form, namely, that of large-scale carved oak retables with painted wings – many of which still adorn the high altars and side chapels of churches scattered throughout the Rhineland, Sweden, and Belgium – I cannot but marvel at this portable miniaturised version. It is small enough for me to cradle with my two hands. Not only can I open and close the wings with just the slightest touch, I can fully rotate the object to examine all sides. The triptych’s backside is slightly chamfered, not flat – a feature that we sometimes encounter in large-scale winged retables – and on the reverse of the winged predella is a hinged circular door that reveals a relic cavity when opened. Such intimacy of handling is 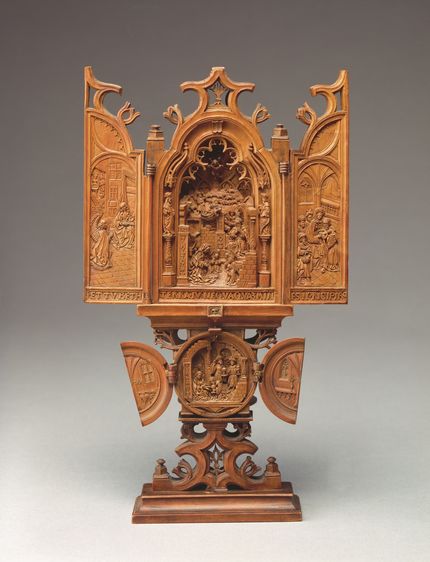 almost impossible with larger altarpieces, making me cherish even more this miniature boxwood one in the DIA’s collection.

Dr. Yao-Fen You is Associate Curator of European Sculpture and Decorative Arts at the Detroit Institute of Arts (DIA) in Detroit, Michigan. She has been a member of CODART since 2004.

The Bon Vivant Back in the Hermitage

The life of the painting The Bon Vivant (De vrolijke drinker), by Louis de Moni (1698-1771), has been quite eventful. During the lifetime of the Dutch master, at the start of the 1760s this work in cabinet format was purchased for the collection of Catherine the Great along with its pendant A Fish-Woman (Verkoopster van zeevis en garnalen). For a century and a half, these two paintings hung in the gallery at the Hermitage, an extension of the Winter Palace, which was not open to the public. The Russian Revolution of 1917, which brought radical change to the rule of the land and in all segments of society, however, saw their fate shift dramatically. In 1930, together with many other art objects, both paintings were moved from the Hermitage into storage at the Antiquariat,1 then sold in a Soviet-organised auction of museum pieces to art dealers mainly in Western Europe. For a long time, every trace of both paintings appeared to be lost. It seemed as if they had left Russia forever. But almost a hundred years later one of them was to return to the banks of the Neva. In 2015, The Bon Vivant emerged at the Rafael Valls art gallery and dealers in London. Not long after, the painting was bought by the State Hermitage Museum from a Russian art dealer.

Until the present day the panel has been mounted in the gilt frame, with characteristic scroll-type cartouche, with which all paintings in the Hermitage galleries were ‘uniformly’ displayed in the mid-nineteenth century, in the 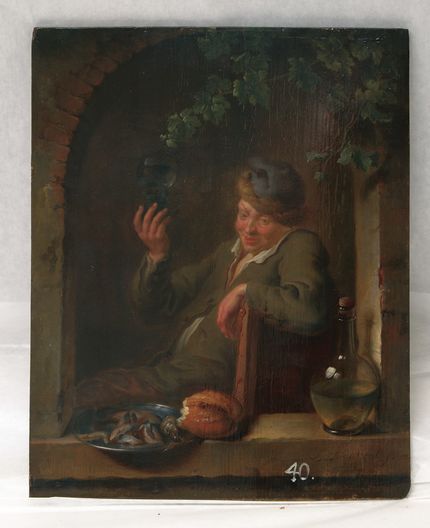 preferred style of Tsar Nicholas I. This fact testifies that the work was once in the possession of the Imperial Hermitage Collection.2

Russian sources from the eighteenth and nineteenth centuries name the panel differently: ‘The bon-vivant’, ‘Un homme faisant collation’, ‘The merry drinker’, ‘The enjoyer of life’, ‘The reveller’. A wax seal on the back of the

painting and its old inventory number 40 on the front indicate a connection to the renowned collection of Johann Ernst Gotzkowsky in Berlin.3 The acquisition of this collection by Russian Empress Catherine the Great in 1764 formed the basis of the picture gallery at the Hermitage. According to the archives, The Bon Vivant and its pendant A Fish-Woman did not go for a small sum: Gotzkowsky was paid 500 Reichstaler for them.4 In the mid-eighteenth century, there was much demand for De Moni’s genre paintings.5 At the auctions of the famous collections of Gerrit Braamcamp (1771) and Johan van der Marck (1773), for example, his paintings once fetched high prices: at the latter, two kitchen scenes sold for 825 guilders.6

‘The merry drinker’, a smiling man sitting at the window with a glass of wine in his hand, is painted in the tradition of the ‘fijnschilders’ from Leiden and at first glance brings to mind the work of Golden Age masters: many familiar elements appear in this scene. The still life painted with elegance and painstaking detail – herring on a tin plate, a carafe of wine and a piece of bread on a stone windowsill, on which the signature and the date are inscribed: L. de Moni, 174[3] – bears a striking resemblance to the oeuvre of Frans van Mieris, the elder (1635-1681) in particular. The light, refined colour palette and the nonchalant pose of the protagonist, however, belong more to the eighteenth century: the ‘galant era’. The arched window which gives the composition a trompe-l’oeil effect not only demonstrates the virtuosity of the rendition, but also draws the 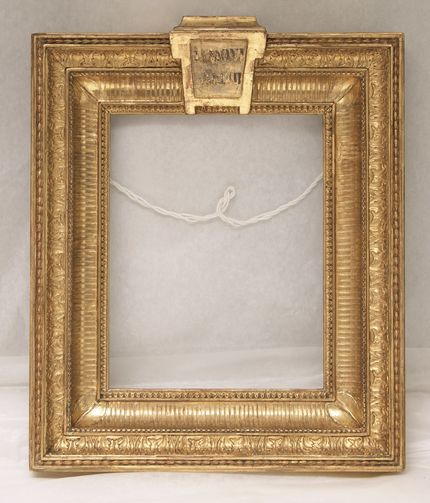 viewer unwittingly into a dialogue with the painted figure, who merrily raises his goblet to the viewer of the panel.

That The Bon Vivant by De Moni was known in Russia is clear from the engraving made after the work by S.M. Vasilev,7 which was part of a particularly popular series of prints about the paintings of the Flemish School published in St. Petersburg between 1826 and 1832.8 In the State Hermitage Museum, photographs of both paintings

by De Moni – taken by court photographer F. Nikolaevski in 1904 and 1917 – have been preserved in which we can see that they were excellently preserved.

As is well known, the year 2017 saw the commemoration of the 100th anniversary of the Russian Revolution, which so dramatically determined the course of history in Russia, and with it that of Russia’s art treasures. How extraordinary the story of a painting can therefore be, is demonstrated by the singular fate of the small panel, The Bon Vivant, by Louis de Moni. We may still hope that at some point the whereabouts of its pendant, A Fish-Woman, will become known.

Dr. Irina Sokolova is Curator of Dutch Paintings at the State Hermitage Museum in St. Petersburg. She has been a member of CODART since 1999.

1 According to the deed of 27.06.1930, the Antiquariat agency of the USSR (1925-1937) was tasked with the sale of valuable artworks (paintings, drawings, sculptures, silverwork, porcelain, and so on), in order to finance accelerated agricultural and industrialisation plans.
2 While no longer visible today, on the auction photograph from the Rafael Valls gallery, the name of the artist ‘De Moni’ is still legible on the cartouche of the frame, in Russian and in French.
3 Out of the three wax seals on the back of the panel, one can be identified as the seal of Prince V.S. Dolgoroekov, Russian envoy in Prussia, who brokered the purchase of

These texts were published in The Low Countries. Arts and Society in Flanders and the Netherlands, Antwerp, 2018 and are reproduced by the courtesy of TLC.