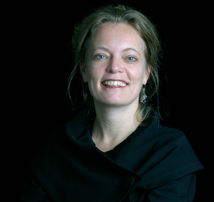 In the Netherlands of the 1960s, which was characterized by socio-religious compartmentalization (called in Dutch verzuiling, or “pillarization”), it was completely normal to describe a village as Catholic, Protestant or communist. Although this phenomenon has largely disappeared from the cities and villages of the Netherlands, there is the occasional exception: the city I live in, Zutphen, has a clearly anthroposophic character. Free-range butchers, organic bakers and women wearing “healthy” sandals are conspicuous features of the urban landscape. According to the principles of anthroposophy, life is divided into cycles of seven years. Each seven-year span marks the end of one period and the dawn of another. I realized this last summer, when I celebrated my seventh anniversary as the director of CODART, which coincided with the fourteenth anniversary of the organization itself. One would think that after seven years, and certainly after twice seven years, CODART would finally be a “finished” product. 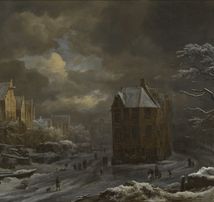 It is always a delight to present works of art from private collections to your audiences. It becomes something even more special if these are little known. If, moreover, you are able to exhibit a cream selection that the owner is happy to give on long-term loan to your institution, you may count yourself particularly fortunate. Such has recently happened to the Scottish National Gallery in Edinburgh. Thanks to the generosity of the present Marquess of Bute, some of the finest northern European Old Master paintings from the famous Bute Collection at Mount Stuart are currently on public display in Scotland for the first time in more than sixty years. 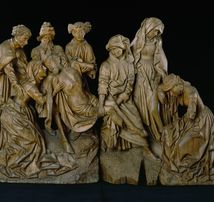 Decorative Arts in the DIA

Most CODART members are familiar with the Detroit Institute of Arts’s collection of early Netherlandish paintings and seventeenth-century Dutch and Flemish paintings. For many a curator of Dutch and Flemish art, Detroit is Bruegel’s Wedding Dance, Rembrandt’s Visitation or Ruisdael’s Jewish Cemetery. The museum’s holdings of seventeenth-century Dutch paintings, the great majority of which are by signature artists of the Golden Age, is one of the larger collections of its kind in the United States.

Less well known are the DIA’s rich and varied holdings in sculpture and decorative arts from the Low Countries, from the Middle Ages to the eighteenth century. 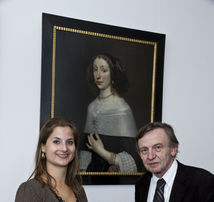 Rudolf Erik Otto Ekkart (1947) studied art history at the University of Leiden. After completing his studies, he worked at the Academisch Historisch Museum in Leiden and then at the Museum Meermanno-Westreenianum / Museum van het Boek in The Hague. In 1987 he was appointed deputy director and three years later general director of the RKD (Netherlands Institute for Art History). In 1997 he obtained his doctorate at the University of Amsterdam, having written his dissertation on “Portrettisten en portretten: studies over portretkunst in Holland, 1575-1650” (“Portraitists and portraits: studies on the art of portraiture in Holland, 1575-1650”). Since 1997 he has also served as chairman of the “Ekkart Committee,” which carries out research into works of art stolen during the Second World War. In 2004 Ekkart was appointed Affiliate Professor of Methodological Aspects of Art-Historical Documentation at the University of Utrecht. In addition to these activities, he serves on the board of numerous organizations in the national and international cultural sphere and is the author of many articles, books and catalogues. On 1 November 2012, Ekkart will retire as director of the RKD and hand over his duties to Chris Stolwijk. 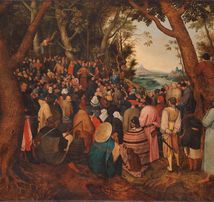 In 1961 the city of Bruges acquired from a private collection in Belgium a copy after Pieter Bruegel the Elder’s Sermon of Saint John the Baptist that has since been on extended display several times as part of the permanent collection of the Groeningemuseum. The discolored varnish and some minor retouches gave the panel a yellowish patina that detracted from the otherwise superb state of conservation of the pictorial surface. The question was raised in 2011 whether the panel should undergo conservation treatment to remove the varnish and to enhance the few retouches. Since the wood of the panel’s frame was warped on one side and therefore gave a distorted impression, the possibility of reframing was put forward. The issue of a custom-made frame and the objectives of the conservation treatment were discussed by Nadia Vangampelaere (Collection and Documentation Department at Musea Brugge), Francine Huys (Paintings Conservator at Musea Brugge), Till-Holger Borchert (Chief Curator at the Groeningemuseum) and Manfred Sellink, Director of Musea Brugge and eminent specialist on Pieter Bruegel the Elder. 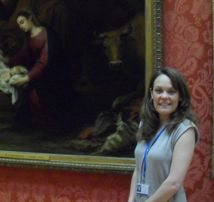 I was appointed Curator of Old Master Pictures at The Wallace Collection in November 2011, just in time to find myself fully involved with the major refurbishment of the building (Hertford House) that began in 2000, involving the renovation of a sequence of galleries with new lighting. My first major project was to devise a new hang for the Dutch pictures in the newly refurbished East Galleries. This is the leading collection of Dutch paintings in the United Kingdom, after the National Gallery London and the Royal Collection, and it was a great opportunity, since my postgraduate training at the Courtauld Institute was in seventeenth-century Dutch art and my PhD was on Rubens’s Bacchanals. I had also been trained as a curator at the National Gallery, where, as Curatorial Assistant, I provided cover for the Curator of Dutch Paintings, Axel Rüger, during his one-year sabbatical from the gallery. 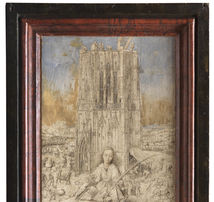 The incompleteness of unfished paintings makes them at once eye-catching and not entirely presentable, certainly when surrounded by pictures that attract attention because of their highly developed illusionism. What makes unfinished paintings so captivating, though? In my opinion, they fascinate us because they trigger questions that are not prompted by finished works. Why did the artist leave the work unfinished? Why is the most important figure still missing from the composition? What would the finished painting have looked like? Incomplete works are bathed in mystery. 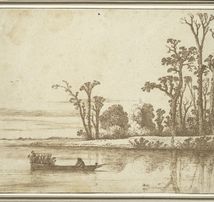 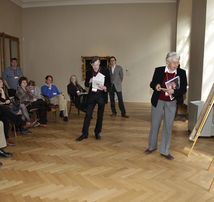 In both quantity and quality the 550 paintings of the Dutch Golden Age in the collection of the National Gallery in Prague form one of the most important holdings outside the Netherlands. They also represent the most prestigious part of the Prague Collection of Old Masters, yet they are still insufficiently known, both to the domestic and international public and to the scholarly world.

In February 2012 a long-term research and restoration project on the Prague Dutch Masters culminated in the publication of the first Summary Catalogue and the opening of the exhibition Rembrandt & Co. – Stories Told by a Prosperous Age, the first large overview of seventeenth-century Dutch art in the Czech Republic. Both projects would have been impossible without the support of many, many CODART members and affiliated institutions, in particular the RKD and the Rijksmuseum, Amsterdam.